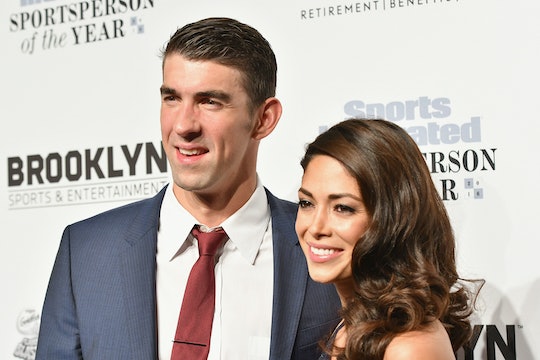 Olympic swimmer Michael Phelps is used to people talking about his successes and accomplishments as an awarded Olympian — and by opening himself up to the public, he's also used to people criticizing him. But that doesn't mean that's an invitation to criticize his wife, Nicole, who is the mother to their two young sons, 2-year-old Boomer, and 3-month-old Beckett. This past week, people apparently got critical when she pumped her breast milk at a fancy event — but Nicole Phelps' message to people criticizing her for pumping in public is one that a lot of people can take to heart.

When a new mom is breastfeeding their child, they have to take every opportunity that they can to do so, even if that means doing it in public (which some people might be uncomfortable with, as Parents noted). So, the same rules for breastfeeding moms should still apply to moms who spend a night away from their child, but still find themselves needing to pump milk, right?

While Nicole thought this was obvious and found herself needing to pump for her 3-month-old son Beckett at her husband's gala earlier this week (which she documented on her Instagram Story), according to People, some people took offense to her doing this. Maybe it was the fact that Nicole was dressed in black tie attire, or maybe it was because she simply decided to publicly pump. Whatever the reason might have been, Nicole took to Instagram on Tuesday to set the record straight — all moms need to pump and breastfeed at multiple times during the day, and fancy events certainly aren't an exception to this.

"Motherhood is one of the most incredible experiences and being able to breastfeed is a gift," Nicole wrote in the photo's caption.

It's almost hard to notice Nicole's hands-free Willow wearable breast pump in the Instagram photo, which allows moms to pump their breast milk in a discreet fashion. Yet, people apparently still had a problem with the size of the pump which is why Nicole had to address why she had to pump in the middle of her husband's gala. Nicole continued in the Instagram caption, writing:

Some people won't agree where I did this and even worse if I was sitting there with Beckett nursing people might judge me. But breastfeeding is NATURAL. I have to admit there were times at the Olympics when I was feeding Boomer in the stands. I want it to be known that women don't have to hide in the bathroom to take a moment to provide our babies with food. We should be able to, without judgement, nurse/pump (easier with a wireless pump) anywhere we're comfortable...because we all know you're not going to "let down" if you're not relaxed!!

Other Instagram users agreed with what Nicole had to say about pumping. "This was so refreshing to read. We shouldn't be ashamed for what our bodies were meant to do! Thanks for posting this," one user wrote.

"I've always been nervous to breastfeed in public but this post inspires me to not give a damn," another commenter added.

"Everyone needs to see this!" one commenter exclaimed — and they're completely right.

If people knew that Nicole was breastfeeding Boomer (who was 3 months old at the time, according to NBC Los Angeles) during the 2016 Summer Olympics, where he watched his dad earn his 21st medal, according to PopSugar, some of them might have had a heart attack. So it is awesome that she is coming forward about her experiences now.

It's not like Nicole had a choice — as she wrote on her Instagram caption, women shouldn't have to hide when they're providing their babies something as simple as food. And in the United States, there are laws that protect breastfeeding moms — women have the right to breastfeed their baby wherever and whenever their baby is hungry, according to the U.S. Department of Health and Human Services.

Although she shouldn't have to explain her decision to pump in public to anyone, Nicole's post can bring so much attention to ending the stigma surrounding pumping in public. The more people see other moms openly pumping, not only will they realize that it is normal but might even be inspired to do it themselves. Nicole's Instagram post on Tuesday has the ability to do just that — inspire others to pump in public — whether it be at the grocery store or at a black tie charity event. At the end of the day, nothing stops a hungry baby.