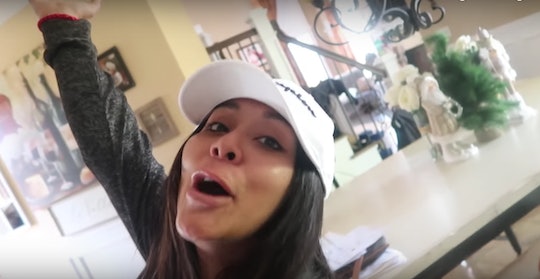 Nicole "Snooki" Polizzi Shared Footage Of Her First Ultrasound With Baby No. 3

Even after welcoming two children with her husband, Jionni LaValle, Nicole "Snooki" Polizzi didn't even try to hide the fact that, as far as she was concerned, she wasn't even sort of done with baby making. And though it may have taken her longer than expected to get pregnant this time around, in a new YouTube video, Nicole "Snooki" Polizzi documented learning she was expecting baby number three, and it's pretty clear that should couldn't possibly be any happier to share the news.

Though the Jersey Shore star technically already spilled the beans about her third pregnancy with her fans in a sweet Thanksgiving Instagram post — where she shared a photo of her two children, 6-year-old Lorenzo and 4-year-old Giovanna, holding a framed ultrasound photo of their soon-to-be sibling — on Thursday, Snooki uploaded a nearly 12-minute video of the moment she learned the exciting news on her YouTube channel. In the video, she showed off numerous positive pregnancy tests, before heading to her first sonogram, where she got to hear her growing baby's heartbeat.

And judging by the clip's title, it sounds like there's plenty more to come: the reality star indicated that this video was the first episode of her "maternity series," which will share updates as she approaches her June due date.

In the episode, Snooki revealed that she'd been feeling a bit anxious this time around about how much longer it was taking her to get pregnant. She said, "Me and Jionni had been trying to have a baby since July ... and I was getting a little worried because it wasn't happening as soon as I wanted it to." Snooki explained that well-meaning friends and loved ones tried to brush it off as just being a matter of being older this time around, but that wasn't exactly a welcome message: she quipped, "B*tch, I'm 30, relax."

Snooki went on to explain that if it were entirely up to her, she would "want to have kids every year," but said that, in retrospect, she thinks the timing of her third pregnancy was actually perfect. She told viewers in the video:

We've been wanting another baby since Giovanna turned 3. It just wasn't the right timing, you know? ... I wanted to be completely ready — and you're never really ready for a baby — but for your third, you can plan when you want to be ready. And I just wasn't ready.

For one, Polizzi had her hands full filming the MTV reboot Jersey Shore: Family Vacation, and was also busy working on various products for her brand. But these days, with filming wrapped, she seems more than ready to throw herself into new motherhood once again. And best of all? It sounds like her children are totally ready as well.

After having the opportunity to see her little 9-week meatball on the ultrasound screen, Snooki explained that she intended to go home and tell her kids before putting them to bed that night, and that she expected they'd be super excited. She said that Lorenzo and Giovanna have "been waiting, they've been asking for another baby," and that she thought they'd have "an amazing reaction" to the news.

Though it's not clear how often Snooki intends to share future pregnancy-related videos to YouTube, fans can at least likely look forward to a gender reveal. Snooki said that she expects she and Jionni will find out in advance since they don't like surprises, but added that they'll probably do a big reveal for their families by "getting a golf ball, because Jionni loves golfing, and [they'll] hit it, and then that's how [they'll] tell everybody."

Though not all celebrities are down to be super open about their pregnancies, it's already pretty clear that Snooki has no intention to keep the details — or her excitement — on the down low. And that likely means plenty more adorable updates still to come.