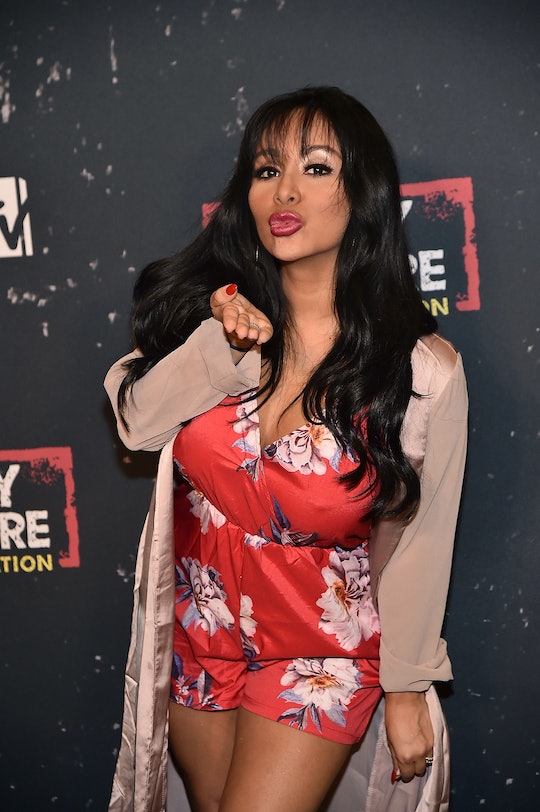 In case you missed the exciting news, Nicole "Snooki" Polizzi took to Instagram on Thanksgiving to announce she's pregnant with her third child. As for how things are going so far? Well, Snooki's recent pregnancy update makes light of her wild days on Jersey Shore, therefore proving that she still has a sense of humor even if she's dealing with what seems like some nasty morning sickness.

Fans were thrilled when Snooki shared a photo of her two young kids, Giovanna, 4, and Lorenzo, 6, holding a sonogram photo. "What I’m thankful for this Thanksgiving ❤️ 🙏🏽 #family," the adorable caption reads.

Since the announcement, Snooki has shared happy snaps regarding her pregnancy, like the Instagram photo she posted of herself lounging with Giovanna. "Super excited for this little mawma to be a big sissy. She kisses my belly everyday patiently waiting. 😩," she captioned the shot. Aww.

But on Tuesday, Snooki's pregnancy took a sharp turn left after she posted a seemingly haggard photo of herself to Instagram Stories. "My Uber's [sic] probably think I'm hungover. #Pregnant," she joked.

Although it's not clear what specific symptoms Snooki is experiencing at the moment, it's clear she still knows how to crack a joke. You've got to love the mom for acknowledging her past reputation as a party animal on Jersey Shore, right?

Jokes aside, I hope Snooki feels better soon. Pregnancy can be tough.

Even though Snooki is feeling down at the moment, she's just thankful to be pregnant.

“I was getting a little worried because it wasn’t happening as soon as I wanted it to,” Snooki confessed in a video about her pregnancy, according to People.

Like I said before, Snooki is a pro at peppering tough topics with humor.

Now that Snooki is pregnant again, she's looking forward to the future and to all of the amazing things she'll experience during this time. One example? Her pregnant Jersey Shore co-star, Deena Cortese, who opened up about how she and Snooki want their kids to be super tight.

"We’re hoping both are the same gender so they’ll be best friends — and if not, maybe they’ll date!” Cortese gushed to Life & Style magazine.

Speaking of the baby's sex, Snooki is hoping for a boy. "I don't want any more girls. If I have a girl, I'm just going to be really upset about it," she shared, according to E! News.

Snooki's little kids, however, are excited about the addition either way. Want some proof? Giovanna and Lorenzo already have presents picked out for their sibling.

“Santa, can you bring bath bombs for the new baby?” Snooki captioned a photo of the pair posing with Santa Claus.

"These two I can’t! They are just adorable," a fan said about the kids' generosity.

Someone else chimed in: "Omg they are soooooooo CUTE!!!"

Yep, it's clear Snooki and her family are psyched about this pregnancy. And here's to hoping the rest of Snooki's pregnancy is smooth sailing from here on out.