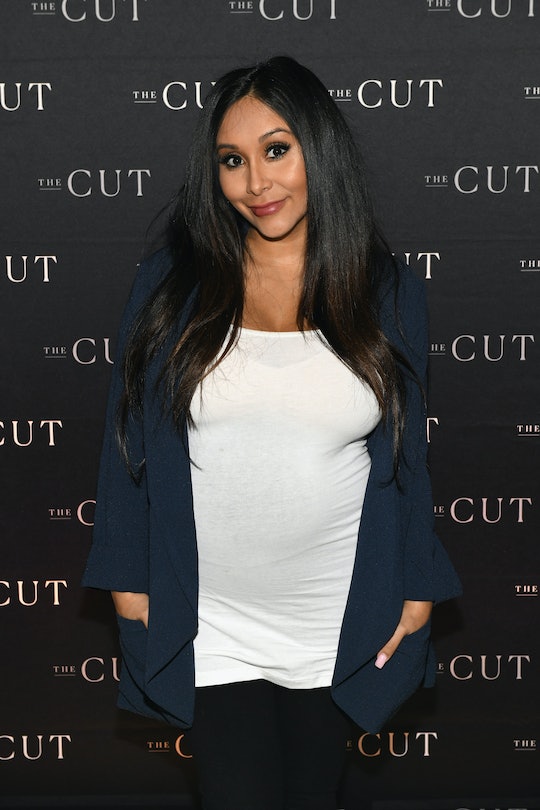 If it seems like no matter what you do, people are judging you for your parenting choices — you're probably right. For some reason, everyone thinks they're an expert, and that they know what's best in all parenting situations. Never mind that they don't know you or your children personally. They may not even have children of their own, either. Nope. But apparently, there are armchair parenting experts all over the place. The good news? There's no rule saying you have to take this "advice" lying down. And Nicole "Snooki" Polizzi's response to people shaming her for using a stroller at Disney is perfection.

On Tuesday, April 2, the mom of two took to Instagram to share photos and videos from her recent family trip to Disneyland. One photo in particular received a fair amount of attention — but not necessarily in a good way. "Have a magical day #disneycrew #2019," the mom of two — and one on the way, according to People — captioned a photo of her group. In the picture, the four adults are standing behind two single strollers and a double stroller — all with kids inside. It was the size of the children in the strollers that ruffled feathers.

"It's time to make them kids walk lol," one person commented.

"Omg my kids would never be in a stroller that big," another Instagram user wrote. "3 kids. And have done Disney 3 times. If you’re over 2, your walking. And I’ve never lost anyone."

Another person declared, "Them kids to dam big for strollers."

Yet another Instagram user commented, "All them kids know how to walk 😂😂."

Yet another Instagram user even brought up Disney's new stroller policy, which prohibits strollers larger than 31 inches wide and 52 inches long, according to Today. They wrote, "Andddddd a perfect example of why Disney’s enforcing stricter guidelines on strollerssssssss #kidssobigtheirfeetdrag." (For the record, most of the strollers seem to meet the regulations, which don't go into effect until May 1.)

Still, plenty of Instagram users also came to Polizzi's defense. One fellow mom wrote, "My kiddos were in the double stroller for as long as I could move it. I’m not walking at their pace and having them rest in between activities assured a longer and happier stay in the parks each day. Now they’re teenagers and I can’t keep up with them. @snooki have a magical time!"

Another Instagram user wondered, "What’s up with all the mom shaming? Some of you act like you’re the perfect parent with perfect children. Good for you if your child will walk 10 miles at Disney World. If she wants to put her kids in a stroller, let her! I’m 32 years old and I would ride around in a stroller too around Disney." Honestly, same. (And for the record, plenty of people rent scooters at Disney parks for recreational use, though that's a separate conversation.)

"Mine are both 6 and they still sit in a stroller while we navigate Disney," another fellow mom commented. "So much easier for them and me! Have fun!! 💚."

Another Instagram user wrote, "Are people for real about the stroller thing? Disney is a lot of walking. Going later this year and I’m definitely going to use one for my son who will be 4.5 years old. He hasn’t used one in probably 2 years, but I know he’ll get tired and tap out. Disney vacations are expensive so we gonna be out there all day making the most of it."

Snooki herself also clapped back at the haters. "They walk!" she commented. "But in large crowds I prefer they sit their *sses down. Save me the stress of not losing my offspring." Makes sense to me.

Granted, Polizzi isn't a stranger to online mom-shaming. (Like when she was called out for not combing her daughter's hair., or for allowing her daughter to wear makeup.) But still. Come on, people! Disneyland is kind of a big place, just in case you weren't already aware — and kids get tired after walking around all day. A word of advice to the online shamers: Keep your judgey comments to yourself.

More Like This
Kaavia James Obviously Had A Shady Response To Letting Her Mom Be Elsa From ‘Frozen’
Alexandra Breckenridge Has A Sweet & Adventurous Little Family With Her Husband
Dr. Jill Biden Just Delivered Some Frank, But Powerful, Advice On Motherhood
Where To Buy School Uniforms, From Jumpers To Dress Socks