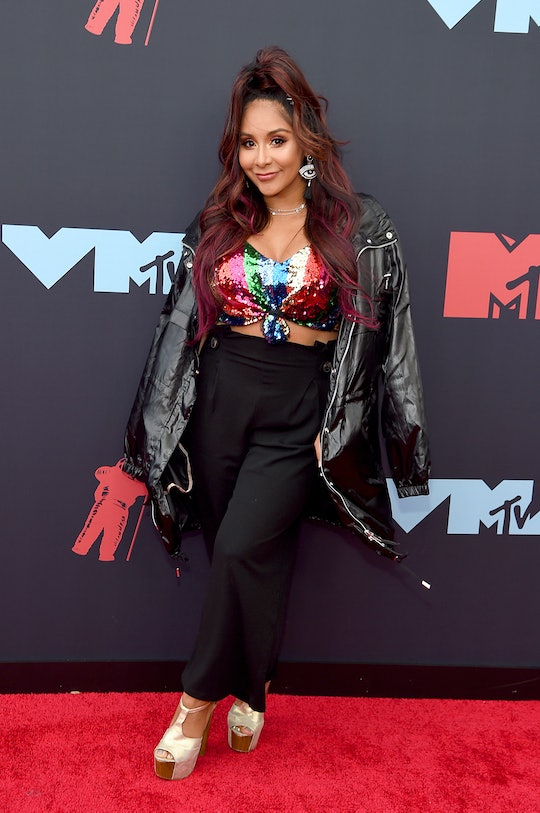 Jersey Shore Family Vacation star, Nicole "Snooki" Polizzi, has always been known for being a little too honest in her real life and on the MTV show. And after she gave birth to her third child in May, not much has changed — she's still as honest as ever. This is why people will love Nicole Polizzi's three month update for son, Angelo, because it perfectly captures her personality as a mom of three.

Polizzi and her husband, Jionni LaValle, are the devoted parents to three adorable kids — 7-year-old son, Lorenzo, 5-year-old daughter, Giovanna, and 3-month-old son, Angelo, according to People. In spite of having some major experience when it comes to being a mom, Polizzi is doing things just a little bit differently when it comes to baby number three — like monthly updates about her son. These monthly updates are a great way for new parents to keep track of their baby's likes, dislikes, and new milestones while sharing these very exciting things with their friends and family members. And while this might be a super exciting task with the first child, it's easy for parents to slack on this when it comes to the third child. Polizzi clearly knows this to be true.

On Sunday, Polizzi shared a photo of Angelo on his three month birthday holding a piece of notebook paper with the words "three months" written on it in black marker. There aren't any fancy onesies, stickers, or chalkboards here — just a simple sheet of paper. It's absolutely hilarious and just as effective as any elaborate update about her son.

People shouldn't fault Polizzi for her no-frills approach to this update. Priorities shift when you have three kids — parents begin to stop caring about the little things, according to Scary Mommy, and put that attention elsewhere. Polizzi has a lot of places to put her attention — in addition to starring on Jersey Shore Family Vacation and raising her three kids, she runs her own store, The Snooki Shop, in New Jersey. So, her time is a lot more limited than it used to be.

While the sheet of paper isn't as polished as a onesie or chalk board with fancy calligraphy, it's just as effective and gets the job done. Polizzi's followers think it's pretty genius, too, especially since it highlights what it's like to be a mom of three.

"Pulling out all the stops for baby number three," another commenter added.

"You know you're on your third child when you just use notebook paper," another commenter hilariously stated.

But this isn't the first time that Polizzi got innovative. For Angelo's one month birthday, she used a sticky note to let fans know that he was turning a month old. How's that for creativity?

Although Polizzi's sign might seem like she is a little too stressed out and distracted, it's actually the opposite. She told People in June that she is thriving as a mom of three. "I love the chaos of it all," she said. "Even though it's beyond stressful and tiring. I wouldn't have it any other way. I love my crazy kids who drive me nuts."

Although creativity may fall to the wayside with three kids, chaos is certainly plentiful. Polizzi's super creative update with her third son pretty much proves that.