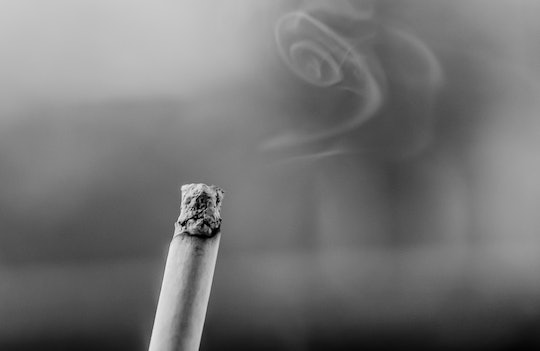 We've known about the dangers of smoking, and secondhand exposure to smoke, for many years. We also know that women who smoke during pregnancy are at higher risk for complications. Now, new research says that cigarette smoke exposure before and after birth could have lasting effects on a child's development. Nicotine exposure during pregnancy could cause hearing loss in children, a new study claims.

While secondhand smoke has a lot of risks, pediatricians have especially pointed out to parents that if they smoke at home, their kids are more likely to get ear infections. Several studies have shown that children who are exposed to secondhand smoke get otitis media (a middle ear infection) more often than kids who live in smoke-free homes.

Persistent ear infections can be serious, especially when kids are little. Even though they can often be treated with antibiotics, if children get a lot of ear infections — and therefore require several courses of antibiotics — they can become resistant. Pediatricians have known for decades that frequent ear infections can impact a child's hearing, but what scientists have figured out in this latest study is that hearing damage from nicotine exposure might actually begin before birth.

The researchers used mice to study the effect of nicotine on the developing fetal brain. They put some nicotine into the water of pregnant mice (since, you know, mice can't smoke a cigarette) so that the blood nicotine levels of the mice were similar to what they would be in humans who smoke heavily.

The offspring of the mice were then exposed to nicotine before birth, and for several weeks after birth as they nursed. When scientists looked at how the baby mice brains had developed, compared to baby mice who had not been exposed to nicotine, they saw that a part of their brain that handles sound processing (the auditory brain stem) didn't develop normally.

Researchers also noticed that the brains of the mice who had been exposed to nicotine during fetal development didn't do as good of a job transmitting auditory input from the cochlea to the auditory brainstem. In other words, it may be that nicotine exposure effects multiple areas of sound processing.

In human children, if that part of the brain was abnormal it could lead not just to hearing challenges, but speech difficulties too. Parents sometimes don't figure out that their child is having trouble hearing until they notice their speech is delayed, or they display social difficulties that can sometimes be confused for Autism Spectrum Disorders.

More research is needed — and of course, since this was done in mice, researchers can only make informed guesses about what the findings mean for moms who smoke before, during, and after pregnancy, and the lasting impact it could have on their kids.