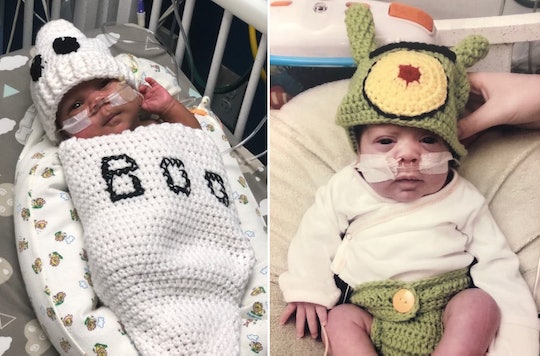 At Children's Healthcare of Atlanta, a non-profit children's healthcare system in Georgia, NICU babies are celebrating their first Halloween with handmade costumes crocheted especially for them by a thoughtful and talented NICU nurse. Although too young for trick-or-treating (it is only their first Halloween, after all), nurse Tara Fankhauser felt there was no reason the babies being cared for in the neonatal intensive care unit (NICU) at Children's Healthcare of Atlanta couldn't share in the holiday's festive spirit. And so, for the last four years, Fankhauser has crocheted each little babe their own unique Halloween costume.

"For babies spending their first Halloween away from home, a NICU nurse is bringing the holiday magic to them in a big way," Children's Healthcare of Atlanta wrote in a recent Facebook post featuring photos of the costumed babies. "For the fourth year in a row, nurse Tara — who’s also a mom of three — spent months crocheting costumes for her patients."

Although Fankhauser has always crocheted costumes for herself and her family, she didn't begin making costumes for NICU babies until someone suggested the idea in 2015, Alanna Gardner, a public relations coordinator for Children's Healthcare of Atlanta, tells Romper. Since then, dressing babies up in Fankhauser's hand crocheted creations has become something of a tradition at the hospital's NICU. Photos of the costumes Fankhauser crocheted for NICU babies in 2017 were even featured in Redbook.

"The families are always so excited and surprised" by the costumes, Gardner tells Romper, adding that the babies often help inspire Tara's idea for their costumes. This year, for example, Fankhauser crocheted a Rocky Balboa boxing costume for a baby who'd been nicknamed "Champ" by his father while a super friendly baby was crocheted an adorable Casper the Friendly Ghost costume. Another baby, deemed "a peanut of a fighter" by the Children's Healthcare of Atlanta was made a Dumbo the Elephant costume. Other costumes Fankhauser crocheted this year for the NICU babies included a lion, Plankton from the SpongeBob SquarePants TV series, and Sally from The Nightmare Before Christmas.

In fact, Gardner describes Fankhauser as a kind of "spooky Santa," noting that "even though [parents] know Tara and see her all the time as a nurse," they don't know that she's behind the adorable Halloween costume bestowed on their baby. But perhaps most impressive is the fact that each baby is given a unique and original costume. According to Gardner, Fankhauser has never repeated a costume in the four years that she's been crocheting them for NICU babies.

"Tara's goal is to give these parents a sense of normalcy while their child is in the hospital," Gardner says. "Parents deserve to laugh and smile and see their kids dressed up for Halloween like everyone else and that's what she aims to deliver on."