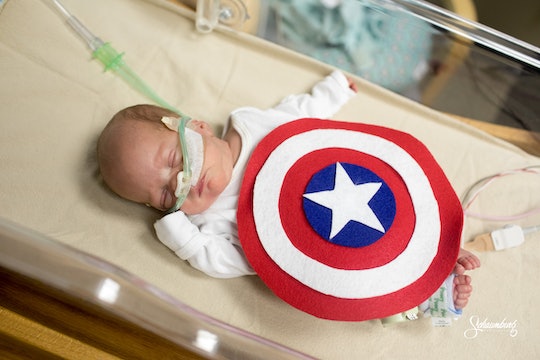 NICU Babies Get Tiny Halloween Costumes, & The Results Are Precious

NICU is a sad and stressful place to be for any new parent and their new baby. So the folks over at the St. Luke's Hospital in Kansas City cooked up a sweet little Halloween surprise: teeny, tiny little costumes for the preemies in their care. Yes, these NICU babies get tiny Halloween costumes and even a sweet little pumpkin so they can kind of trick or treat for the very first time. And the results are beyond precious.

The costumes were made with love by the nurses and volunteers from the March of Dimes and include everything from tiny super hero capes to butterflies and baseball players. According to Redbook magazine, there were 35 babies who got costumes at the hospital this year.

“The parents were able to choose their babies' costumes to match the babies' personalities,” Michelle Manuel, the hospital’s director of media relations, told ABC News. “The idea is to be able to allow parents to have a sense of normalcy. In the NICU you might be there for weeks or months and this is to help spend that first Halloween and those special first moments together — make those special family memories with us.”

Emmalee Schaumburg volunteered for the March of Dimes to take professional photos of the babies in their costumes, and the result is a moment and keepsake their families will undoubtedly treasure forever. She shared some of the darling photos with Romper.

NICU, is the neonatal intensive care unit, where the sickest babies are treated. According to the March of Dimes, just some of the conditions that could land a baby in the NICU include breathing problems, anemia, pneumonia, heart issues, feeding problems, jaundice, and even sepsis, many of which can be terribly dangerous for tiny babies.

The costumes are genius. They look like they're just little felt overlays. Whoever was in charge of coming up with the idea is a genius. The babies don't look like they even need to be awake to get in the Halloween spirit. But it's easy to see that this is a Halloween gift for worried, stressed, and I'm sure very tired, parents who just want to get their lives back to normal and their babies home where they belong.

The babies also got a "trick or treat smell my feet" card with their little footprints to help mark their first Halloween along with a little book to read with their parents next year.

And here's a cute video of the babies all dressed up from Good Morning America.

One of the 35 NICU babies who got a costume is Myla Nieder, who was born premature, according to KMBC News.

“It makes me feel like it’s somewhat normal because normally in here, she would have missed out on Halloween, and she wouldn’t have had a costume,” Carli Nieder, who has spent weeks in the NICU with her daughter Myla said. “Now we get to participate in her own kind of Halloween here.”