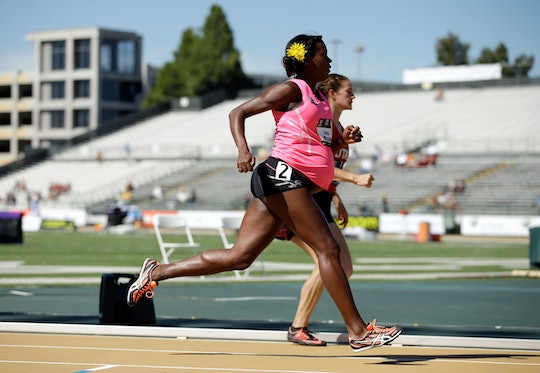 After facing criticism for how it has previously handled contracts with athletes who became pregnant, Nike has updated its protections for pregnant athletes, according to CNN. In a letter to Nike-sponsored athletes, the company recently said it would expand protections against performance-related reductions and contract termination for pregnant athletes in an effort to allow new mothers more time to bond with their baby and recover from childbirth.

Roughly three months after announcing it would grant pregnant athletes a 12-month exemption from performance reductions, Nike moved to expand those protections to 18 months late last week, according to ESPN's Emmanuel Acho. "Nike is committed to championing, celebrating, and supporting our female athletes and we are pleased to include in your contract an updated commitment of our existing policy to support female athletes through pregnancy," John Slusher, Nike's executive vice president of global sports marketing wrote in an Aug. 12 letter obtained by Acho. The letter was reportedly emailed to all of the company's sponsored athletes.

According to Slusher's letter, all athlete's contracts would, effective immediately, specify that, "If ATHLETE becomes pregnant, NIKE may not apply any performance-related reductions (if any) for a consecutive period of 18 months, beginning eight months prior to ATHLETE's due date." The letter also noted that "NIKE may not apply any right of termination (if any) as a result of ATHLETE not competing due to pregnancy," during the same 18-month period.

In a statement to Romper, Nike confirmed the new policy will cover a full 18 months and that female athletes and their representatives would soon begin receiving written confirmation of the policy.

Olympian Allyson Felix, who'd previously spoken out about her own experience as a pregnant Nike-sponsored athlete in an op-ed for The New York Times, hailed the newly expanded policy in a statement shared on Twitter. "Our voices have power," Felix tweeted. "NIKE has contractually provided maternal protection to the female athletes they sponsor. I’m grateful to NIKE leadership for believing that we are all more than athletes."

Previously, Felix said Nike's history of financially penalizing athletes who were pregnant or whom had recently given birth through performance reductions had left her feeling pressured to return to running before she, or her body, was really ready. "I felt pressure to return to form as soon as possible after the birth of my daughter in November 2018, even though I ultimately had to undergo an emergency C-section at 32 weeks because of severe pre-eclampsia that threatened the lives of me and my baby," she wrote for The New York Times.

But Felix wasn't the only athlete to have publicly spoken out. Olympic long-distance runner Kara Goucher also disclosed her own struggles with being a pregnant Nike-sponsored athlete in an essay written by fellow Olympic runner Alysia Montaño and published in The New York Times. According to Montaño, Goucher was forced to choose between breastfeeding and resuming her training one week after giving birth in 2010 as Nike had allegedly refused to pay her until she began racing again.

When athlete's criticism against Nike was first made public in May, the sportswear retailer told CBS News it "recognized that there was inconsistency in our approach across different sports" but said they had "standardized our approach across all sports so that no female athlete is penalized financially for pregnancy" in 2018.

A few weeks later, in a memo to company staff that was obtained by Bloomberg, Nike Vice President Amy Montagne said the public criticism "has been a humbling moment." It was then that Nike unveiled a new policy exempting pregnant athletes from meeting performance requirements for 12 months. In opting to expand that policy, Nike has finally emboldened athletes with the means of balancing families and their career.