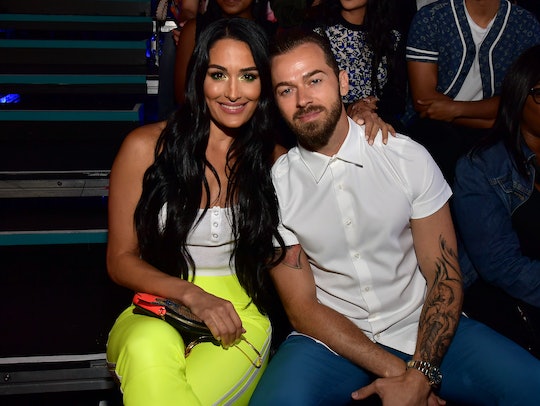 Shortly after the WWE stars confirmed their twin pregnancies on Wednesday, Nikki Bella and Artem Chigvintsev shared a sonogram photo on social media to announce the news. The recently retired pro-wrestlers and Total Bella stars revealed through People magazine that not only are they both expecting, but their due dates are only a week and a half apart from each other.

"Say hi to our very strong warrior baby," Nikki tweeted Wednesday along with a sonogram image. The Total Bella star later revealed on Instagram that she will be 13 weeks pregnant on Thursday and is already beginning to show.

While Nikki, who is pregnant with her first child, is the first to give fans a peek into her pregnancy, the twins revealed to People that Brie was actually the first to learn she was pregnant. "My husband and I were trying for seven or eight months, but then I felt in my heart it was a sign from God, like, 'You guys are good with one,' so we stopped trying," Brie told People, referencing the 2-year-old daughter she shares with husband Daniel Bryan. "When we were in France meeting Artem's family, I felt a little off. I was irritated and uncomfortable in my body. When we got home, I took a test two days before Thanksgiving, and when I saw the positive sign, I was like, 'Oh, sh*t!'"

According to Nikki, it wasn't too long after Brie's positive pregnancy test that she began feeling the need to also take a test. "I kept getting this feeling that you need to take a pregnancy test, but I wasn’t even late yet," Nikki told People. "I'm like, 'Why do I keep having this feeling? Am I getting twin vibes from her? Because she just told me she’s pregnant?'"

Nikki later confessed on her Instagram that although she'd initially felt nervous about becoming a mom, she's thankful to be pregnant. "It's something I have wanted to be my whole life," she wrote on Instagram. "I was definitely shocked when I found out. And so nervous! I wasn't expecting it and felt I wasn't ready but this journey of life is unpredictable. I thank God every day and night for bringing this amazing blessing and miracle into my life."

The retired pro-wrestler also said that she's grateful to have her twin sister along for the ride. "This life just wants you and I to be twinning at everything we do and even though we were shocked, beyond shocked, here's another journey that I am so grateful to God to have you by my side," she wrote on Instagram. "You have already been the best teacher!" The twins have revealed on Twitter that Brie's due date is a week and a half ahead of Nikki's.

While news of the twins' pregnancies has certainly left fans pleasantly surprised, it's also been a shock for the Total Bella stars. "We are shocked like all of you," Brie wrote Wednesday on Instagram. "Never in a million years thought did I think @thenikkibella and I would be having pregnant bellies together!"