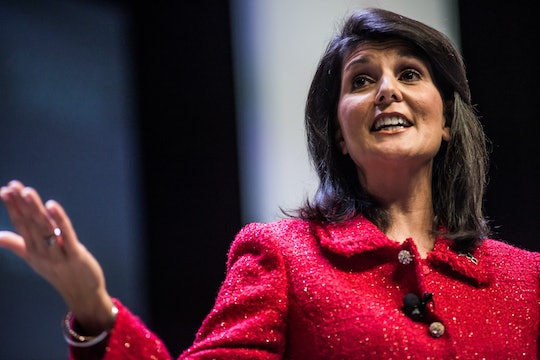 Senate Majority Leader Mitch McConnell (R-Kentucky) said in a statement on Tuesday that South Carolina Gov. Nikki Haley would deliver the State of the Union response following President Obama's address on Jan. 12. According to a report by The State, Haley is the first ever South Carolinian to give the official SOTU response. Coming off of a high-profile political year, the speech could give Haley the boost she needs to be seriously considered as a potential Republican vice presidential pick.

"Nikki Haley is a proven leader and committed reformer who believes deeply in the promise of the country we all share," McConnell stated on Tuesday. Within minutes of the announcement, Haley's fellow Republicans had begun applauding the decision.

"... Haley has led an economic turnaround and set a bold agenda for her state, getting things done and becoming one of the most popular governors in America," House Speaker Paul Ryan said in a statement. "In a year when the country is crying out for a positive vision and alternative to the status quo, Gov. Haley is the exact right choice to deliver the Republican address to the nation."

Haley has been contemplating the idea of a vice presidency bid since mid-September, after supporters at a National Press Club meeting in Washington questioned whether she would consider running on the GOP ticket. "If there is a time where a presidential nominee wants to sit down and talk," Haley responded, "then of course I will sit down and talk."

It's unclear whether Haley's SOTU address will be used as a litmus test to determine her VP eligibility; However, it's likely that at least a few big names will be watching closely. For her part, the South Carolina governor seems to be up to the task.

"I was honored to be asked by [Speaker Ryan] and [Sen. McConnell] to deliver the Republican address to the nation," Haley said in a statement on Tuesday. "This is a time of great challenges for our country, but also of great opportunities. I intend to speak about both."