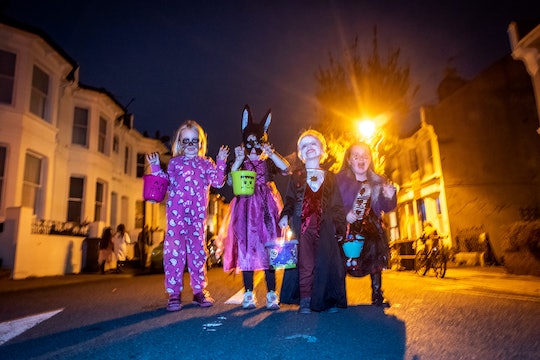 Where Are The Good Halloween Costumes In London?

Not that she will necessarily, but if Kate Middleton wanted to dress her children as tiny Met Ball-era Kylie Jenners, she would have no problem in the U.S. finding the Halloween costumes to pull it off. In the UK, it’s a different story. Whether it be due to Brexit being gruesome enough as it is, or retailers realizing that more and more people are buying online, the options this year in London are feeling a little… dead.

Although the spooky season is traditionally more of a U.S. festivity, you’ll always find half of London dressed as a zombie whilst the other half won’t bat an eyelid. If you’re in the former group but have left your look until the very last minute, it can truly be a nightmare, as Romper reports in a boots-on-the-ground operation to find decent kids' costumes in London Towne.

Growing up in rural England meant that unless an older relative was feeling particularly craftsy, your only option were glow-in-the-dark witch fingers from the local supermarket (that’s a “grocery store” to you lot) and it’s not exactly the most kid-friendly option when you consider it takes away their ability to use their hands. Having intense nostalgia for these impractical accessories, I took a trip to the nearest 24-hour Tesco in Hackney to get some. (This was also the Duchess of Sussex's approach, as People reported in a headline for the ages: "Kate Middleton Takes Prince George and Princess Charlotte Halloween Shopping at Local Supermarket.") Unfortunately I was only met with a sparsely haired witch’s hat, generic trick-or-treat buckets, and some of those cobweb decorations. With this being the most likely place to pick up Halloween-themed bits in the area, it was far from being a great selection.

Dad of one Tim likewise tells Romper that he headed out to a number of high-end stores looking for something suitable for his toddler Sonny to wear on a plane (“A legit fright for the flight”), and found the selection “kinda limited.”

Central London shops surprisingly didn’t offer much more either, with popular high street stores Next and H&M having absolutely no costumes at all, which is weird seeing as they definitely offered options years prior. Being the actual flagship stores, they weren’t exactly small shops and their websites still offered various costume options for people of all ages — great unless you’re rushing around trying to grab something last minute, which describes 90% of us.

Recalling a time that I managed to get face paint from Claire’s for Halloween a decade ago, I decided to swoop in. I was under the illusion that there’d be loads to choose from as they’d strategically placed their Halloween gear at the entrance, a couple of steps in realizing it was concentrated into a single stand at the front. A nasty Halloween trick, barely any treats.

Whilst walking through the streets it was obvious there was no Halloween spirit. There were no creepy window displays aside from in the lingerie shops (not kid-friendly).

Next up was Primark. A classic for cheap fashion bits, expecting a few cat ear headbands at the minimum. What I wasn’t expecting was absolutely no gruesome goodies, instead rails and rails of Christmas jumpers. Honestly, it was genuinely scary because it’s October.

Figuring the usual fashion retailers weren’t offering much, the nearby vintage stores seemed a better idea, being both unique and sustainable. First up was a pay-by-the-kilo vintage shop called PICKNWEIGHT in Covent Garden, and whilst they had reams and reams of second-hand finds organized by color, there wasn’t anything specifically Halloweeny, and nothing for children. To test how much something would cost, I threw a single band tee onto the scales which worked out to be roughly £23($30), with which could buy you an entire costume online.

Next door there was a Rokit, a vintage retailer that started off as a market stall but now boasts four separate stores across London. Inside to the left of rails and rails of second-hand gems there was a tiny Halloween section, mostly comprising used wedding dresses, tulle skirts, and a small selection of fancy-dress superhero-type onesies. Once again, no options for kids.

Further into Soho there was Beyond Retro, a similar vintage store with thankfully a slightly larger specific Halloween area; even offering wigs, masks, fake blood and accessories. Though there weren’t specific children’s costumes, there were smaller-sized items that would fit older kids. Their stock is mostly sourced from Canada, a country with presumably more exposure to Americanized Halloween traditions based purely on proximity, so the selection was fairly decent. Some of the looks included genuine cheerleader outfits and high school sports jerseys. There was also, notably, a Trump mask.

Whilst walking through the streets it was obvious there was no Halloween spirit. There were no creepy window displays aside from in the lingerie shops (not kid-friendly), showcasing sultry looks reminding us of that iconic Mean Girls scene. Thriller played from inside McDonalds, frighteningly tone deaf, but aside from that it was almost like Halloween wasn’t even happening. Though they did have these awful bat glasses in a card shop.

Costume shops are everyone’s go to in terms of quality and variety for all ages for a quick last minute outfit grab. High Soho was very busy, with Romper overhearing a woman requesting a Margaret Thatcher costume. Masks appeared to be popular and had styles ranging from Guy Fawkes (remember, remember; arguably a bigger cultural touchstone) to the classic Scream, various clown styles all the way to Shrek in a mustache. Once again there was a rubber Trump rendition, this time wearing joker makeup. It was obvious that everyone was trying to cash in on the recent Todd Philips film.

Being one of the largest capital cities and home to 55% of the UK’s film industry, London isn’t completely without options. Angel’s fancy dress hire is the largest privately owned costume hire in the world and their Shaftesbury Avenue store is open to the public with expert costumiers at hand to help build a custom look. Their historic duplicates are second to none, you’d definitely win any costume competition as an accurate Jon Snow or Daenerys Targaryen. Obviously this service can be quite pricey but their shop downstairs has options for a fraction of the price.

Unfortunately it seems that everyone’s best bet is shopping online. Whilst writing this, both Very.co.uk and Joke.co.uk were featured on This Morning for stocking affordable kids costumes not seen on the high street. Luckily, signing up to Amazon Prime enables you to get same-day delivery, which is great news for anyone who’s forgotten entirely but terrible news if you’re scared of finding the reason why there aren’t swarms of options physically accessible in the first place. "There's heaps of choice on Amazon," says Ali P., who lives in London but has opted to go the handmade route, "even though they're the devil." Admittedly, many of the outfits on there would make absolutely no sense to you Americans, with looks paying homage to the Gregg’s vegan sausage roll (don’t ask) as well as a Tesco basics Halloween t-shirt, which is equally as hard to explain.

For Tim, online won the day. “I ventured online and within five mins had a lush all-in-one skeleton outfit that’s super cool and good quality from H&M for £17.99.” Eighteen quid? Spooky.

This article was originally published on Oct. 30, 2019