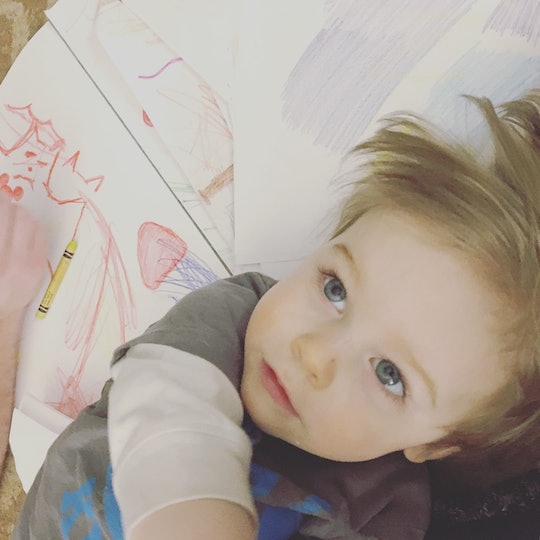 When I was pregnant, I didn’t freak out about what would happen when I actually had the baby. Mostly, I just obsessed over how much I hated being pregnant. I didn’t like that my body space had been taken up by another human being. I didn’t like changing my diet and not being able to sleep and being kicked from the inside. My body felt nothing like it used to, and that was hard for me.

I probably should have read more about the issues surrounding child-rearing itself, such as breastfeeding and sleep training. Mostly, however, I just sat around, complaining about how uncomfortable I was. Then the baby showed up, and bam! I realized that there were a million questions I had about everything that were left unanswered, particularly when it comes to sleep.

I didn't know if I was supposed to create a bed time, or if it was just something that happened to you. I didn't know if I was supposed to save my wailing little alien from despair whenever he cried, or if you needed to teach it to toughen up from the start. I knew the first few weeks with my son Ollie would be just flat-out no sleep, but I knew we had to come up with a sleep plan soon, whether or not we were at all prepared. Ultimately, we didn't end up coming up with a sleep plan, but our baby still ended up sleeping like a dream.

A good friend gave me a book about sleep training at one of my baby showers: The Sleepeasy Solution by Jennifer Waldburger and Jill Spivack, both psychotherapists and sleep experts. But I didn’t take a peek at it until my baby was a few weeks old. Then I looked it over and took a few mental notes. Put the baby to bed around the same time every night. Have a bedtime routine. Make a plan for how you will approach wake-ups. Stick to plan. Stick to plan.

I've never been great at sticking to a plan.

The truth is, I've never been great at sticking to a plan. I mean, for years my life plan was to grow old alone and eat ice cream every night for dinner with a house full of pets. Yet here I was, a responsible adult with a partner and a baby. So I wasn't that confident that I could sleep-train our little one.

The book also included pages that allowed parents to take notes, controlling for various scenarios: Write down items 1, 2 and 3 in Columns A, B and C. If D happens, move straight to E. It was too much for me: too many letters and numbers, and too many equations. So I put the book at the bottom of the bookshelf and began doing what I do so well: operating haphazardly and hoping for the best.

At around six months, my partner and I started heading to the bedroom around 8 p.m., give or take. Occasionally, our son would fall asleep at 5:00 or 6:00 p.m. after an incredibly tiring day. Sometimes, he would stay up without signs of extreme fatigue until 9:00 or 10:00. On these occasions, we went with it. We never forced him to stay awake or forced him to sleep. We let his obvious needs dictate our moves.

We'd then put his pajamas on, unless he was already in super cozy clothes, and shut the door. At this point, no one was getting in or out. We weren't going to slip out to get on our phones, and we certainly weren't letting the dog in, and the kid wasn't crawling outta there. The goal was to communicate to Ollie that the day. Had. Ended. (But only for you, little baby! Little do you know of the fun we parents are about to have after we turn out your light!)

Sometimes, we read one or two books prior to dropping him into the crib, unless we didn’t want to or if he was too tired to pay attention. But we always sang a song. Honestly, singing a song was the only thing we have done with any diligence. We have sung him “Goodnight, Sweetheart” every night since the first night we put him in his crib. When visitors are over, we invite them in to sing with us. It’s a short little ditty with an easy-to-sing tune.

And that's about it. That's our sleep training method in a nutshell.

Ollie has slept through the night 99% of the time. I could count the times he has woken up mid-slumber on two hands. He has slept like a damn angel since the get-go — which means that I have been sleeping like an angel, too. I don't know why it's been so easy for him to sleep — maybe it has something to do with the fact that his dad is the calmest person I've ever met, or that I tend to sleep like a brick — but all I know is that once our son is asleep, you won't be seeing him until the next morning.

I know that this is a huge blessing, and that it is not the norm by any means. I have a friend, a mother of three, who has stated that she has not slept a full night in 7 years. 7 years. I would calculate how many nights that is, but I hate numbers, so I won’t bother breaking my brain. Suffice to say, my heart goes out to her. Meanwhile, I’m sitting pretty over here. I have aged since our baby came along, but not for lack of sleep.

Still, I would encourage all of those with new babies to consult books if they're having trouble sleeping. Find the sleep plan that's right for you, but pay attention to your munchkin's specific needs before you decide to blindly stick to it. And always remind yourself that no matter how your baby sleeps — whether they let you sleep for 10 minutes or 8 hours at a time — you are so, so lucky to have a baby in your home, whether he's right next to you or in the room next door.