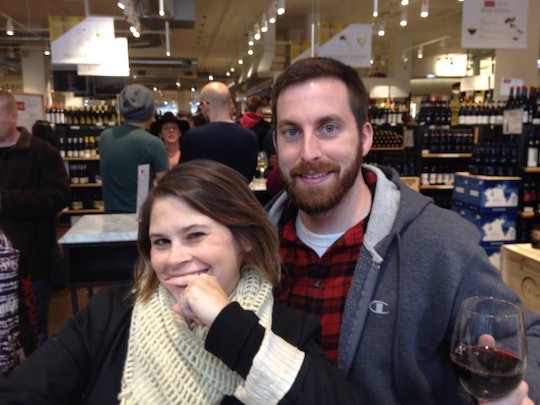 No, I Don't 'Owe' My Husband Sex For Father's Day

Last year, the website Babycenter asked 1000 dads what gift they wanted for Father's Day. The results were surprising: nearly 57 percent of them said that the gift they wanted more than anything else on Father's Day was sex — because apparently, sex is a "gift" that can be given from one person to another, like a tie or a boxed set of Quentin Tarantino movies. Needless to say, I have a major issue with this, which is why I refuse to buy into the idea that I "owe" my husband sex for Father's Day.

Let's be clear: I'm no stranger to bargaining with my husband. We negotiate with each other on a daily basis. If he changes our baby’s diaper, I’ll walk our dog. If he cooks dinner, I’ll wash the dishes. If he picks up wine on his way home from work, I’ll brush our child’s teeth. It's a good strategy, but it's task-oriented by nature, and I don't ever want us to get to the place where I consider sex with him a task.

But that's exactly what the belief that men deserve sex on Father's Day implies — and plenty of people on the internet seem to think it's a great idea. On CafeMom, for instance, one mom wrote a whole post about how sex really is the "perfect gift" on Father's Day, because there's "no agonizing over what to buy or how much to spend, no schlepping to the store to find something." OK, sure, maybe giving your husband sex as a Father's Day gift is cost-effective, but if you thought about the implications of it, you'd probably decide to buy him a nice new shaving kit instead.

If you really want to have sex with your husband on Father's Day, then great, that's awesome. But if you're doing it as some kind of a "gift" to him, well, that's more than a little bit creepy.

Let's be clear: No one "owes" another person sex for any reason, at any time.

For starters, you never hear people offering the same advice on Mother's Day, even though women want sex just as much as men do. It also assumes two things: a) that men are always interested in sex above all other things, and b) that sex is something that a woman can "give" to a man as a gift, instead of both parties wanting it and enjoying it equally. And neither of these things are true.

In a meaningful adult relationship, sex should not be treated as a form of currency. It's not something that should be withheld if you're angry at your partner, or something that you should use as a reward if they do something good. It's an expression of trust and intimacy that should be treated with the utmost respect. (Plus, it feels really freaking good.) And above all else, it's something that both parties should want and enjoy equally.

I shiver at the thought of my husband thinking he deserves sex on a given night. Because let's be clear: no one "owes" another person sex for any reason, at any time. It’s 2017. Sex should always be a choice made by both parties, based on mutual desire. Who wants to have sex when there is anything else at play? Who wants to have sex with someone who is doing it "for you" – and not, at least partially, for them? That sounds miserable to me.

Who wants to have sex with someone who is doing it "for you" – and not, at least partially, for them? That sounds miserable to me.

When sex becomes a task, it loses the very pull that makes it attractive in the first place. It loses its luster. It flatlines. The only kind of sex I ever want to have is the kind that we both actively want to have, with no other chips on the table. It should never be a transaction, and there should never be an ulterior motive involved.

And for the record, I asked my husband what he would like for Father's Day. His answer was immediate: "A new car." (His car is on its last leg and is making a lot of weird sounds.) When I asked him to pretend he already had a new car, he answered quickly again: "Beer." Then: "Chicken wings." So if you are planning on "giving" your husband sex for Father's Day, maybe it's worth checking in with him to see if that's what he even wants in the first place.