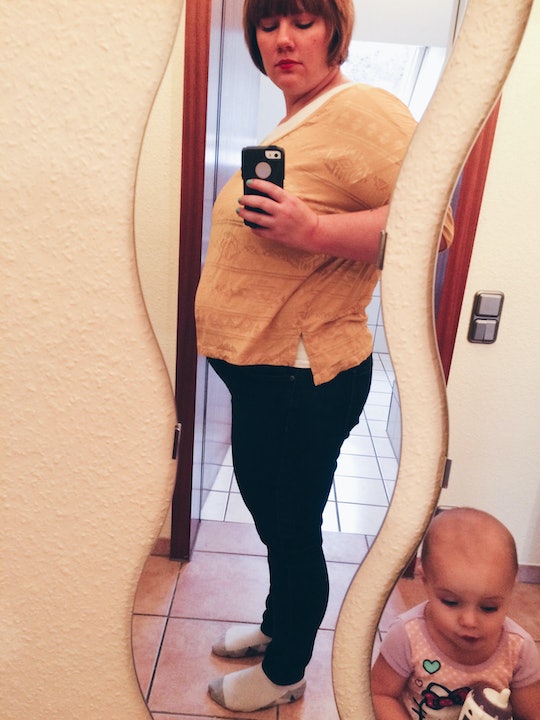 After having my first baby, my postpartum weight was one of the very few things I didn't worry about. When I looked at my naked body in the mirror or stepped on the scales after giving birth to my first child, I largely felt indifferent about my weight. Yes, I realized that my belly was significantly saggier than before. So were my breasts. My hips seemed wider, and my thighs larger. But there were too many other things on my mind, like what new stage of development my baby daughter was in, to think twice about how my body had changed.

Then people started making comments about my body, which made me realize that not everyone thought the way I did about postpartum bodies. Once, I was at the grocery store when a lady complimented my six-month-old daughter, who was riding in the cart. “And she’s ready to be a big sister already!” she declared as she eyed my tummy.

I just smiled. I wasn’t offended that she thought I was pregnant, because I've always had a noticeably pudgy stomach, but her comments did get me thinking: Why does a large belly on a woman always indicate pregnancy? And why do total strangers feel the need to comment on your postpartum body?

I am of the mindset that unless a woman has expressly told me she is pregnant, I would never ask or say anything about her body. The problem isn’t so much that I might offend her, it's that my idea of what someone’s body should or shouldn’t look like is so narrow. A big postpartum belly shouldn’t be seen as a negative thing or an indicator of pregnancy, because it’s not fair to me or any other woman to assume that it’s only acceptable or normal to have a big belly if I am or they are pregnant.

Someone close to me asked me if I was really okay with my weight gain and the fact that I wasn’t “doing anything” about it. They were referring to the fact that I hadn't made any effort to diet or lose the weight I’ve gained.

“I mean, you're still wearing your maternity shorts,” they said. “You have to know that means you’re overweight.”

First of all, I wore my maternity shorts because they were freaking expensive and it made sense to me to get more wear out of them, considering how much they cost. Getting more wear out of them for the price I paid only made sense to me! Second of all, they're really comfortable. But perhaps most importantly, yes, I suppose wearing my maternity clothes while not being pregnant does mean that I’m bigger than I was before — and that’s okay.

I have wondered why I haven’t gotten more comments about how good I look after having a kid. But even if no one tells me that I look good ever again, I've gotten to a place where deep inside, I believe I look good no matter what. To that end, I find myself telling more women who’ve had babies that they look amazing, just as they are. A woman raising a child is beautiful, no matter what her body looks like or how much weight she has or hasn't lost along the way. Period.