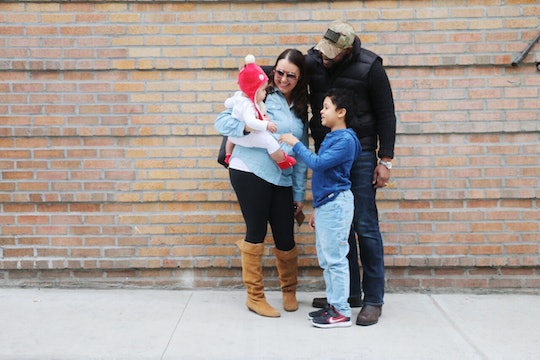 Before you have kids, you have a certain picture of what motherhood is in your mind. It's different for everyone. For me, it was filled with sweet giggles, sticky-free days, and pretty much the picture of perfection that everyone strives for and then quickly finds out isn't possible. I wanted to be the kind of mom who had the absolute best relationship with her kids and was so in tune with their every emotion, want, and need. But the days are long and though all of those dreams have come true (most beyond my wildest wishes), it's not what every single day looks like. And though everyone is more than happy to fill you in on all the tangible things you'll need as a new mom, no one warned me the one thing I'd need most as a first-time mom was something money couldn't buy.

Let's face it: Motherhood takes a toll on you. The reward obviously outweighs anything bad, but there are stressful moments — built upon a messy house and the everyday scramble to figure out what the heck we're having for dinner — that filter into the everyday work of trying to get the kids homework done and attempting to foster the perfect bedtime routine. It's tough, and some days are tougher than others.

Recently, I stood in front of my mirror and tussled with my shirt. I'd just taken the plunge and decided to wear my pre-pregnancy pants out in public that day for the first time in a long time. I thought I'd pulled it off until I walked into the living room and made the mistake of asking my 8-year-old son how I looked in the outfit. His response? “Mom, you look like you’re still pregnant. You should go back and look in the mirror again.” Ouch. I'd just given birth five short months ago, and was only about 7 pounds away from losing all the weight I'd gained during pregnancy. His comment came at me like a pile of bricks, even though I should've known better than to ask an 8 year old his opinion on an outfit.

When you’re pregnant and filled with so much joy and anticipation for this growing baby inside you, you are never, ever told that you need to add thick skin to your baby registry. Yes, I figured I'd need to up my tolerance to everything gross that motherhood brings, but I never I needed thick skin to be a mom.

Then a few days later, on my husband’s day off, I asked him to wash the dishes, since it was his turn and I was on my way to deep clean the bathroom (because living with boys is gross and this needs to be done more frequently than I’d like). He huffed and puffed and finally agreed to do them, then asked me for a thank you. “A thank you?” I snapped. “When was the last time I got a thank you for washing dishes or cleaning everything gross up from around the toilet? Everyone just leaves everything there for me to take care and I’ve never been thanked for it!”

Needless to say, he marched his butt straight to the kitchen, no response necessary, and took his turn scrubbing down our dirty dishes.

When you’re pregnant and filled with so much joy and anticipation for this growing baby inside you, you are never, ever told that you need to add thick skin to your baby registry. Yes, I figured I'd need to up my tolerance to everything gross that motherhood brings, but I never I needed thick skin to be a mom.

I’ve always been a pretty sensitive person by nature; it’s just who I am. The little things, like comments and the way someone looks at me, are what I pay attention to in life and they can either make or break my day. My husband knows that he needs to tiptoe around my feelings a little bit, and he’s OK with that most of the time. (Clearly not whenever he’s grouchy about doing dishes on his day off, though.) But our 8-year-old son? He’s his own person and doesn’t sugarcoat anything.

Sometimes, kids can be pretty funny with how honest even their smallest remarks can be. Working from home, my son doesn’t see me in a lot of makeup very often and the first time he did many years ago, I was of course told I looked "like a clown." I can get a good chuckle out of that and honesty is an important life lesson after all, but I find myself, on many different occasions, taken aback by different things that are said out of sheer honestly. For instance, I know commenting about the dark circles under my eyes (ahem, it's because you keep me up late!) and the unwanted breakout that happened on my face are never meant to hurt my feelings, but sometimes that thick skin can crack.

While riding a crowded subway the other day while babywearing my daughter, I was offered a seat and turned it down because I was getting off in two stops. A woman nearby looked directly at me and said, "You should be doing what's right for your baby." Ah! As if taking the seat would have made anything different for her.

I think that it all comes down to dealing with criticism. For me, it’s a little easier coming from a friend or a relative who doesn’t live with you, because they're on the outside looking in. But when it comes from your family — the ones who live with you and are by your side and know you the very best — day in and day out, thats where it get touchy.

And while I've never had my parenting criticized by immediate family, because they know I'm a good mom, living in NYC brings with it unwanted parenting advice or criticism from strangers on the daily. For instance, while riding a crowded subway the other day while babywearing my daughter, I was offered a seat and turned it down because I was getting off in two stops. A woman nearby looked directly at me and said, "You should be doing what's right for your baby." Ah! As if taking the seat would have made anything different for her.

And when you work so hard as a mom to make everyone around you happy, like when you spend all that time writing a grocery list and making sure to pick up everyone's favorite things and someone still isn’t happy, it’s hard. In fact, some days I wish for thicker skin or that a fellow mom would have given me this warning. When you work so hard thinking about everyone's wants, needs, and even going out of your way to doing things you know will make your family members happy, it's crushing when they don't notice or even instead tell you that you did something wrong.

I wish they knew that all day and all night long my mind swirls with thoughts of them, that they are my world, and if anything upsets them it's not done intentionally. But I'm also learning that I need to let these little comments roll off my back and that I spend more time dwelling on them than they do. In fact, they probably forget about anything that I feel isn't so nice five minutes later, while I'm left angry for no reason.

Here's what I’m learning as I go: I can’t make everyone happy. There will always be someone who feels left out, has nothing nice to say, has a tantrum when you got them the wrong granola bars, criticizes the way you dress, or just doesn’t think you’re the cool mom anymore.

When I entered parenthood, I wish someone would've pulled me aside and told me to develop a thick skin quick and not to sweat the small stuff because being so sensitive was (and will) only hurting myself.

Instead, here's what I’m learning as I go: I can’t make everyone happy. There will always be someone who feels left out, has nothing nice to say, has a tantrum when you got them the wrong granola bars, criticizes the way you dress, or just doesn’t think you’re the cool mom anymore. It’s life. So after having a few days of cool down time since my son’s hurtful comment, I decided to bring it up to him, thinking it could be a learning moment. I knew with every fiber of my being that I was being overly sensitive, but I thought he needed to know how it made me feel.

We were walking home from school and I casually brought it up, sort of making a joke out of it: "You know how you got upset when your friend didn't like the game you wanted to play on the bus today and your feelings were hurt? That's kinda how I felt when you told me I looked pregnant still this past weekend," I said in a giggly tone.

He immediately comforted me. “Mom, I’m so sorry,” he said, adding “I just meant that the particular shirt that you were wearing made you look pregnant, not that you actually looked pregnant.”

I of course, accepted his apology and explained how he needed to watch the way he says things, because the people he meets as he gets older might not have thick skin like his old mom — ha! But in the same breath, it was a lesson for me, too. No one gives you a manual for being a parent, and we all learn as we go through the day-to-day as well. So the next time that I attend a baby shower or a friend is having a baby, you better believe that I'll be the mom to pull her aside and let her in on what I've learned along the way.