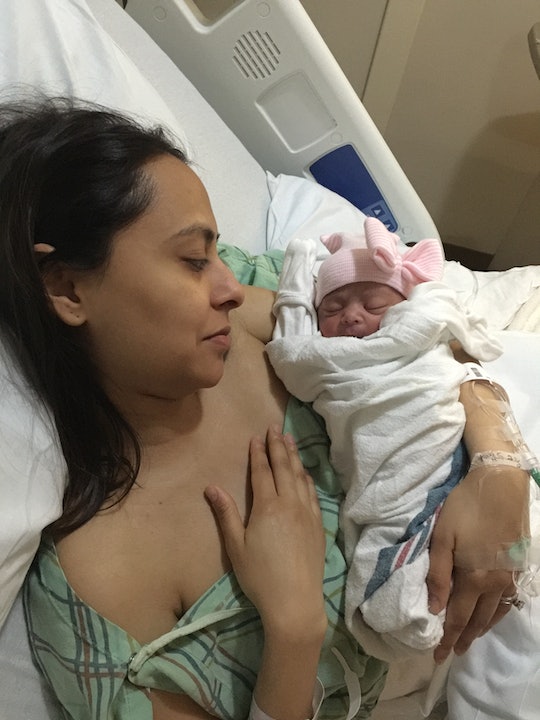 Like many women, I had hoped for a vaginal delivery. I didn't want to get a c-section. In our culture, there's so much negativity and shame associated with c-sections that I was just terrified of getting one. So I never read anything about them, because I was convinced they were something that happened to other women, not to me. So when I did end up having a c-section, I didn't expect the task I would be forced to confront after surgery — the dreaded post c-section fart.

Even though I had my heart set on a vaginal birth, my doctor told me week after week that my daughter was breech. Instead of positioning herself head-down and ready for delivery, she was literally in a sitting position with her head by my chest and her legs by my pelvis. I tried every technique to get her to turn, because my doctor informed me that there were risks associated with the vaginal delivery of a breeched baby. He told me delivery could be delayed, or that my baby could go in distress. But I just didn't want to have a c-section.

Eventually, my doctor broke the news to me that I needed to schedule a c-section. So I did. But I was devastated about it.

My doctor's office gave me a pamphlet that explained the procedure, the risks, and what I could expect during recovery. I skimmed through the pamphlet, and my doctor went over the basics with me. I thought I had a few days to research my c-section, but I ended up going into labor a few days before it was scheduled, so I didn't have much time to read up on it. Luckily, everything went according to plan.

Shortly after the procedure, I was given ice chips. I was told that I couldn't have any water or food. I was exhausted and starving. The last thing I ate was at 6:00 p.m. on a Sunday, and I had my daughter at around 2:30 a.m. on Monday morning. But I still had to muster up the energy to try and breastfeed.

"So you mean to tell me I have to make a big announcement when I pass gas in order to get food?," I wanted to scream at the nurse. "Um, OK, cool."

A few nurses came in to check on me and they kept asking me if I had passed gas. I was embarrassed. I had no idea passing gas after a c-section is important, because air is often trapped in your body when you're sewn up during surgery. I was told that passing gas was a good sign that everything was OK, and that my body was functioning normally.

Eventually, one of the nurses informed me that I couldn't eat until I farted. I was appalled. "So you mean to tell me I have to make a big announcement when I pass gas in order to get food?," I wanted to scream. "Um, OK, cool."

Needless to say, I was annoyed, embarrassed, and kind of in shock. I chomped on those stupid ice chips for hours. Eventually, my husband couldn't wait to eat any longer, and he went down to the cafeteria and got himself dinner. I was incredibly hangry, and I'm sure if looks could kill, he would've died on the spot. He wasn't the only one who was satiated: my daughter had been fed at least six times already. But I still had not passed gas, so I hadn't eaten any food. Time was ticking away, and my stomach was growling.

Everyone kept asking me if I had "done the deed" yet.

Everyone kept asking me if I had "done the deed" yet — nurses, doctors, even my husband. Every time someone asked if I had passed gas, I just gave them a look of disgust. I was tempted to force myself to pass gas, but I was terrified that I would cause myself harm in some way. Hours passed and I thought I would pass out at any given moment from starvation. I will never eat another ice chip again, I thought. Whose idea was it to offer a women ice chips after delivery anyway? I tried to imagine they were potato chips or cookies, but it just made me more hungry and more cranky.

Then, finally, a little toot escaped. It was so quiet I almost missed it, but I was thrilled. I never thought I would have been so excited to announce to the world that I had farted. Finally I could eat! Needless to say, I ate every single thing I was offered. I wish I could remember what my first postpartum meal was, but honestly, I ate so fast it was all a blur.

Waiting to eat after a c-section was the worst, and I don't know why no one warned me about the post-surgery fart beforehand. But it could've been worse: shortly after my torture was over, a nurse informed me that in the past, women who had c-sections were required to have a bowel movement before they were allowed to go home. If I had been pressured to have a bowel movement as well as pass gas, I think I would've died. Not being able to eat and having to announce to the world that I farted in order to get something to eat was bad enough — and it's an experience I will never forget.

More Like This
5 Superstitions About Babies Born On Valentine’s Day
Does The FDA's Plan To Limit Lead In Baby Food Go Far Enough?
20 Baby Names You’ll Love If You Love Hazel
Gaelic Boy Names You Won’t Hear Every Day
What Parents Are Talking About — Delivered Straight To Your Inbox