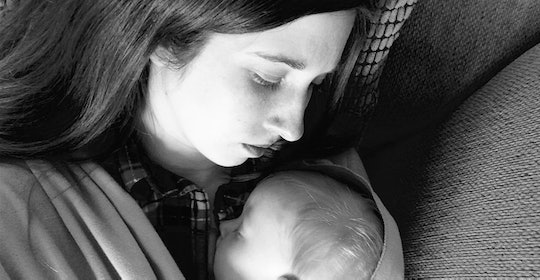 No, Seriously, How Do I Get My Kid To Sleep?

By the time you're on your third baby, everyone sort of assumes you’ve got the whole parenting thing down. You should know how to work your way through those difficult early stages because you’ve been through it all before. Honestly, I figured my third was going to be a breeze. I had been through postpartum depression and anxiety. I had already lived through my fair share of sick-kid horror stories. I had dealt with the eating issues, the infant sleeping issues, the gas issues, the stranger danger, and the needy phases. What was my third really going to throw at me that I hadn’t already experienced? Well, it turns out that six years of motherhood and three kids hasn’t taught me everything — because now my third child is nearly 2 years old and I still find myself asking the internet, “how do I get my kid to sleep?”

These desperate Google searches or Facebook calls for help usually happen deep in the night, after hours of sleepless torture. I find myself in completely uncharted territory, totally clueless as to how on earth I am supposed to get my kid to sleep for six uninterrupted hours, let alone a whole night in his own bed, without screaming or getting up or requiring milk or needing someone to sleep by his side (or all of the above, which is the most common scenario).

I knew to some extent that I wasn’t making the best choice when I continued to bed share with my infant far past the six-month mark when my other two were kicked out of the bed for good. I knew I should have put him down for naps instead of consistently letting him sleep against my chest in my wrap. I was simply so overwhelmed by the prospect of him being my last baby that I didn’t care about the consequences. I wanted a few more snuggles, a little more time to be close to him.

Do I really have a 2-year-old who has never slept through the night? I ask myself. Yes, yes I do.

Had I known exactly what the consequences were, however, I don’t think I ever would have gone down this path. I expected a little bit of a fight when the time came to transition him to sleeping on his own (a feat we are still far from mastering). But to be completely honest, I didn’t expect to be banging my head against a wall, wondering what was wrong with me to let my kid become the nightmare sleeper he is today.

While I know how we got here, it still amazes me that I am at this juncture so late in the mothering game. I feel like I should have known better by my last baby. All the sleeping issues with my first baby should have been enough to convince me to sleep train my subsequent children as soon as humanly possible to avoid the situation I find myself in now. Do I really have a 2-year-old who has never slept through the night? I ask myself. Yes, yes I do.

If I’m being honest, it sucks. I feel desperate for sleep. I dream about it the way I once dreamed of hitting the lottery and traveling the English countryside by train while writing a novel. It seems that far-fetched, that luxurious. I can’t even spend a night away with my husband, because no one wants to babysit a kid who wakes up every few hours like a newborn. We’ve gone multiple birthdays, anniversaries, Valentine’s Days — all at home, all because of our sleepless wonder.

How do I get my kid to sleep? Seriously, how? I’m starting to lose hope he’ll ever grow out of it.

I’ve gone so far as to look up night nurses or finding sleep specialists I could pay to help me work through this, even though I know both options are so far out of budget I could never afford them. I've tried offering my mom all the money I had so she could take him for a few days and sleep train him. I would do nearly anything to get him to sleep through the night. We’ve tried every method with no success, and I am at my wits end.

How do I get my kid to sleep? Seriously, how? I’m starting to lose hope he’ll ever grow out of it — that he’ll be a teenager who wakes in the middle of the night for a cup of milk and then still decide to get up for the day at 5 a.m. I mean, logically I know that won’t happen, but this lack of sleep is starting to make me seriously lose my grip on reality.

For now, I guess I’ll simply have to trust that all the moms who have guided me through tough spots before are right. Everything is a phase. Someday they’ll sleep. Someday, some glorious day, they’ll sleep in. And so will I.