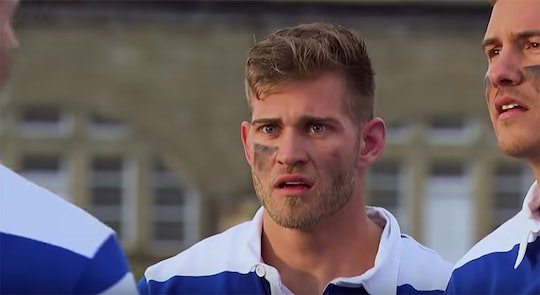 Everyone In #BachelorNation Is *Done* With Luke P.

One of the most polarizing guys on The Bachelorette Season 15 is Luke P., a Gaston-type character who has arguably been aggressive in his pursuit of Hannah. Fans aren't thrilled with his behavior, the other guys in the house are done, and nobody likes Luke P., period. In fact, the majority of Twitter can't wait for the moment when Hannah *hopefully* sends him packing.

There's no getting around the fact that Luke P. can be a bit, ahem, unlikeable. The dude can't read a room, he doesn't respect Hannah when she she asks for space, and he allegedly body-slammed another contestant in what was supposed to be a friendly-ish game of rugby. And while there have been plenty of other villains before in #BachelorNation (Juan Pablo, anyone?), it looks like Luke P. is shaping up to be the most loathed contestant in the show's history.

Of course, it's important to remember that this is reality" TV, meaning there might be a better side to Luke P. that viewers haven't seen yet. That hope faded, however, during Tuesday night's episode when Hannah confronted Luke P. about not expressing his emotions, hinting that he might not be your average bear.

"There's no feelings behind the things that he's saying," she vented to producers. "Can you not express your emotions? Because like, I need more!"

Despite Hannah's obvious frustration, Luke P. still didn't seem to get the memo about acting, you know, human.

"You're just talking in ways that sound good," she told Luke P. as they wrapped up their conversation.

Despite Hannah's reservations, she told the cameras that she's not ready to say goodbye.

"I want to not like him. I want to be able to send him home," she complained. Le sigh.

Fans aren't happy about Hannah's wishy-washy take on Luke P., to say the least, taking to Twitter to share their frustrations.

Someone wrote: "I’m gonna need Luke P. to go home tonight and STAY HOME we don’t need him in paradise THANK U NEXT."

"@AlabamaHannah just send Luke P. home," another commenter said. "He isn’t worth the stress you are going through. You deserve the best and he is clearly not it."

One person penned: "I don’t think i’ve ever wanted someone to be sent home so much before...Luke P. dude, you need to go."

A fan shared: "@BacheloretteABC My husband is sitting with me saying send him home please! Send Luke P. home and focus on the guys that are there."

It's definitely possible that Hannah agrees with the above commenters, but can't pull the trigger due to the show's producers. There's no denying Luke P. makes for good TV, after all.

The other possibility? Hannah is taking a long vacation in f—k boi land, which is a something viewers have witnessed many times before with other leads. I'm thinking Robby Hayes on Jo Jo Fletcher's season of The Bachelorette, an ex-contestant who has since become friends with the Vanderpump Rules crew. Enough said.

That all being said, here's to hoping Hannah sees the light soon because she's too good to waste her time with Luke P.