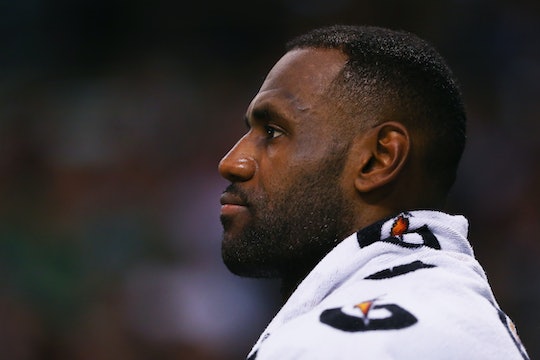 Following a grand jury decision not to indict the Cleveland officers responsible for the death of 12-year-old Tamir Rice, activists on social media are searching for a way to keep the case in front of investigators. To that end, many have taken to Twitter to enlist the aid of the closest thing Cleveland has to a superhero: NBA champion and occasional social activist Lebron James. Using the hashtag, #NoJusticeNoLebron, activists are urging James to “sit out” the next games in his season until the Department of Justice imprisons the police officers involved in the case, according to Cleveland.com.

The hashtag and call to action came from writer and activist Tariq Toure. Over the past week, Toure has tweeted prominent African American athletes and sports figures, urging them to speak out about the lack of indictment in Sandra Bland’s death. After the decision in the Tamir Rice case, Toure turned his attention to getting the Rice case investigated. In one of Toure’s tweets to James, the writer asks that the NBA star “lead a collective sit out until the DOJ imprisons the murderers of Tamir Rice.” Toure added in the same tweet: “It’s more than a game and you know it.”

So far, the Twitterverse seems divided on whether calling on James is the right tactic for activists to take. Some have pointed out, rightly, that activism by football players at the University of Missouri helped secure the ouster of the school’s president after students complained of racist treatment. In that case, the athletes organized a strike and refused to play until their demands were met. But others argue that the request may be too much to place solely on James’ shoulders.

Still, the request isn’t exactly coming from left field. James has more history than most professional athletes when it comes to speaking out about police brutality and the death of unarmed black boys at the hands of officers. In 2012, James was a prominent voice in the wake of the killing of unarmed Florida teen Trayvon Martin. James, along with then-teammate Dwayne Wade, posed for a photo with members of the Miami Heat— all in hooded sweatshirts — in protest of the killing and official response from prosecutors.

Earlier this month, James told Cleveland.com that the Tamir Rice death showed “how much further we have to go.” When asked whether the case meant more to him because it happened to a Cleveland family, James continued, “It doesn’t matter, it’s more troubling that it’s happening in our country. This is our country, the land of the free, and we keep having these incidents happen … our families are losing loved ones.”

Of course, the question is: will it work? So far, James has yet to respond to the #NoJusticeNoPeace hashtag. But if he decides to respond, he would be the most prominent public figure to take a stand on the case since the grand jury declined to indict the officers involved.