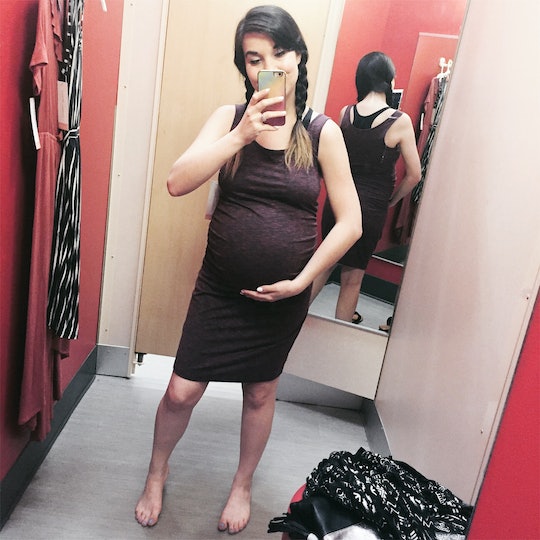 Why I'm Not Doing Kick Counts

I first heard about kick counts through the Bump, the app that I use to track my pregnancy. I initially downloaded it when I found out I was pregnant, excited to see what size fruit or vegetable my baby would be compared to each week – a strawberry? A peach? An avocado? I also loved the detailed Q+A section and filling the checklists for moms-to-be.

It was through one of those checklists that I learned about kick counts. "Start doing your kick counts!" the list suggested, with a little dancer emoji next to it. Having never heard the term before, I started Googling around to find out more. I read about the standard guidance to check for 10 kicks within two hours, and even though I was only 23 weeks along at the time, I decided to try it because my baby was typically fairly active all day. But now I've stopped doing kick counts, and there's a pretty good reason why.

Almost immediately after I learned about kick counts, I felt myself becoming obsessed with trying to hit that number 10, and feeling supremely anxious when I didn’t. Did it mean something was wrong? Was I sitting in the wrong position? Should I try to chug some orange juice to get my baby to move, as the websites advised? Literally a million questions started running through my brain and I couldn't turn them off.

At my next OBGYN appointment, I asked my doctor about kick counts. To my surprise, she told me that she didn’t typically recommend them, unless it was a high-risk pregnancy (which mine was not). She explained that it can be stressful to try to hit a certain number within a certain time frame, and for pregnant women who are prone to anxiety, as I am, it can make those anxious feelings worse.

So she proposed an alternative method – one that I liked much better. She asked me to mentally check in with myself three times a day, at breakfast, lunch, and dinner. During those three check-in points, she told me to ask myself if I’d felt the baby move significantly during the day, explaining that I should feel the baby move several times over the course of a one or two-hour period. If so, she said I should just go about my day and not worry. If not, then she would want me to find a quiet place to lie down or sit and focus on movements. If I didn’t feel anything within a couple of hours, she explained, I should call the office.

I was able to relax and enjoy feeling my baby’s movements, rather than focus on counting and obsessing over getting to 10.

I liked her approach to tracking my baby's movement much better, because it took pressure off me hitting that “magic number” every day. I was able to relax and enjoy feeling my baby’s movements, rather than focus on counting and obsessing about getting to 10.

That said, I think my doctor is in the minority. Most medical organizations do advise expecting moms to do regular kick counts, including the American Pregnancy Association, which strongly recommends that moms do kick counts for high-risk pregnancies. But there have been a few studies that offer a counter-perspective. The Journal of Family Practice published a study of 68,654 women that concluded that daily monitoring of fetal movement does not decrease the risk of antenatal death in average-risk pregnancies — in short, that for women like me, who don't have high-risk pregnancies, kick counts might not be as necessary.

I've been able to enjoy the sensation of feeling my daughter kick or roll around without worrying about hitting a quota.

To be clear, my doctor never said not to monitor my baby’s movements at all – she just offered an alternative perspective to the standard guidelines. And she did stress that I should absolutely call her if I felt a decrease in activity even after focusing on kicks for a few hours. Her suggestion to do things in a different way ultimately worked better for me, emotionally and mentally. Since following her instructions, I haven't felt anxious about my baby's movement; instead, I've been able to enjoy the sensation of feeling my daughter kick or roll around without worrying about hitting a quota.

I think the bottom line is that while there are general rules for pregnancy, there’s no one-size-fits-all approach. Every woman is different, and every pregnancy is different. What works for me won’t necessarily work for another person, and that’s okay. At the end of the day, I think the end goal for all of us is to get through these nine months as safely and comfortably as possible – and whatever method gets us there is undoubtedly the right one after all.

More Like This
New Report Shows 80% Of Pregnancy-Related Deaths Are Preventable
What Does Amniotic Fluid Smell Like? A Nurse Explains
Here's How To Keep Your C-Section Incision Dry
What NICU Means & What To Expect From A NICU Stay