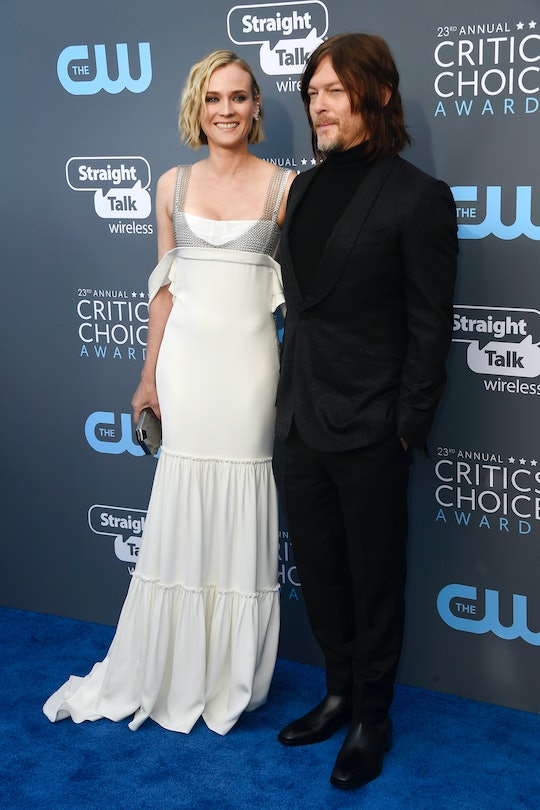 Many parents of newborns can't stop staring at their sweet new baby — or sharing photos of them. If you're friends with them on Facebook or follow them on Instagram, you know. For celebrity parents, in many cases, that's the same. They can't help but share the goings on at home. But other celebrity parents understandably want to keep their baby's identity more private. For Norman Reedus and Diane Kruger, the latter seems to be the case — the new parents also tried to keep Kruger's pregnancy mostly under wraps. And Norman Reedus' first photo of his daughter is definitely in keeping with that — but that doesn't mean that it's not still the sweetest thing ever.

Kruger gave birth to the couple's first child in early November, Us Weekly reported. Though the birth seemed to be a surprise to some because, as Elle reported, she never directly addressed the pregnancy, Us Weekly also reported that she was expecting back in May.

This little one is Kruger's first child, per Us Weekly, but Reedus also has a son, Mingus, whom he shares with ex Helena Christensen. At the time of the baby's birth, no details at all were provided about the baby's sex, name, or anything else, though Page Six reported that the baby was a little girl. As it turns out, Kruger herself (perhaps inadvertently) confirmed that in an interview with Extra, saying:

It's very rewarding. She’s very little, but I’m tired. I feel like a superhero right now.

Reedus' sweet shot is the first photo either parent has shared of their new little one, but her face is hidden — and the photo is heavily filtered. In the picture, Reedus and his baby daughter are holding hands, and it's so cute, your heart won't be able to take it.

"A lot to be thankful for this year. ❤️ this one especially . Love u Diane Mingus @helenachristensen Happy family 😎," Reedus captioned the oh-so-sweet shot, including, of course, mentions of Kruger, his son, and his ex.

There's just something about tiny baby hands that melts your heart, isn't there?

Shortly after giving birth, Kruger was spotted sipping a glass of champagne and, as perhaps is unfortunately expected, people had many opinions about it, thinking that, if she was breastfeeding, she shouldn't be drinking. Actress (and Kruger's friend) Hilarie Burton and her husband, actor Jeffrey Dean Morgan, were quick to jump to Kruger's defense online, as Us Weekly reported. But, really, there shouldn't have been any need for anyone to defend the new mama.

Despite the limited news about new baby girl Kruger-Reedus so far — there's still no word on her name — it's clear that her parents are totally smitten with her. Here's hoping the sweet little family has had plenty of time for lots of new baby snuggles — and has plenty more moments like this in their future.