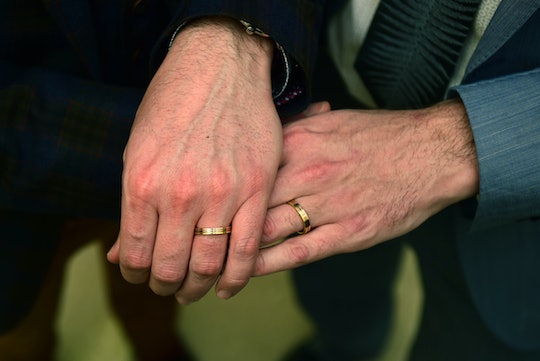 Bringing up a battle that many thought was long over, North Carolina lawmakers are looking to reverse a controversial marriage rights ruling. As it's written, the North Carolina bill would ban gay marriage completely, reversing Supreme Court decisions that, the bill insists, have negated "the clear meaning and understanding of marriage in all societies throughout prior history." The "Uphold Historical Marriage Act," or H.B. 780, claims that "the United States Supreme Court overstepped its constitutional bounds," both in its ruling against North Carolina's Amendment 1 in 2012 and with the Obergefell v. Hodges decision of 2015.

In addition to claims that the Supreme Court's decision oversteps the will of the people, the North Carolina bill quotes Christian Scripture in its explanation, insisting that previous rulings overstep "the decree of Almighty God that ‘a man shall leave his father and his mother and hold fast to his wife, and they shall become one flesh. (Genesis 2:24, ESV).'" Rendering "marriages between persons of the same gender not valid," the act would void all marriages within North Carolina, regardless of where the actual unions took place. Essentially, if a couple married and raised children in California, but moved to North Carolina together, the parents' marriage would not be recognized by their new home state.

The bill is sponsored by three Republican representatives: Larry Pittman, Michael Speciale, and Carl Ford. The Charlotte Observer notes that these men, who are "some of the House’s most conservative legislators," "frequently file bills that don’t get a hearing because House GOP leaders don’t support the proposals." In the past, attempts to overturn the Supreme Court's decision have all been unsuccessful, so many are estimating that there's no way that this bill will pass.

In response to H.B. 780's proposal, North Carolina Democratic Gov. Roy Cooper tweeted about the measure, insisting: "This bill is wrong. We need more LGBT protections, not fewer." In a state where the rights of LGBTQ citizens are constantly under attack, Cooper's leadership, support, and strong voice of opposition are sorely needed.