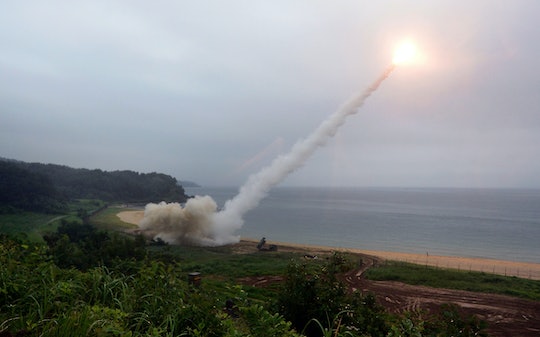 North Korea Says It Will Complete Attack On Guam

In case you've been (blissfully) living under a rock this past week, you're aware that the President of the United States hasn't exactly been getting along with some pretty notable foreign powers. And now, one full day after Trump's initial comments that any North Korea strike on American soil would be "met with fire and fury," North Korea says it will complete attack on Guam's waters. And yes, it's okay to be a little worried.

So, to catch you up a little bit, on Tuesday, "President Trump warned North Korea that it will be “met with fire and fury and, frankly, power, the likes of which this world has never seen before” if the country does not stop threatening the United States," according to The Washington Post. After that, a spokesperson for the North Korean military announced that the country was "carefully examining the operational plan for making an enveloping fire at the areas around Guam," a Korean news agency reported.

And while many have shrugged off these threats as nothing more than a passing phase, this latest breaking news proves that that's not true. According to The Associated Press, "North Korea says it will complete plan to attack waters near Guam by mid-August then wait for commander in chief's order."

North Korea's state-run news agency reported that "The Hwasong-12 rockets to be launched by the KPA (Korean People's Army) will cross the sky above Shimane, Hiroshima and Koichi Prefectures of Japan. They will fly 3,356.7 km (2,085.8 miles) for 1,065 seconds and hit the waters 30 to 40 km away from Guam."

As Reuters reports, the statement also "added that U.S. President Donald Trump's "fire and fury" comments earlier this week are a "load of nonsense", saying only "absolute force can work on him"."

So, to reiterate, Trump's comments could actually have some pretty lasting consequences. And, as CNN reported, those now-infamous Trump comments directed towards North Korea weren't exactly planned. The news outlet reported:

President Trump's fierce warning to North Korea was improvised in the moment, not part of a scripted statement that he prepared to deliver Tuesday, according to three people with knowledge of the remarks.

To clarify: President Donald Trump reportedly made an off-hand comment without fully thinking it through, and now a foreign advisory is planning to attack territory of the United States this month. And while it might be easy to ignore these latest developments if you don't live near Guam, these calls to action are serious and could very well lead to a response from the United States that would launch the country into war. Again.