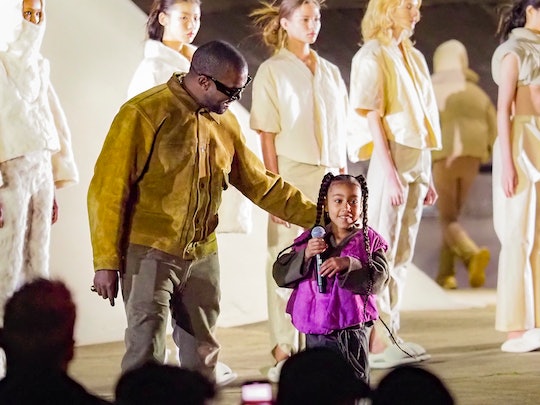 Apparently no one in the Kardashian-West family suffers from stage fright, as evidenced by a video of 6-year-old North West rapping onstage at Paris Fashion Week during her father’s Yeezy show on Monday. Kimye's oldest jumped on stage and got right to business, introducing herself as “Northie” and saying, “cool, cute, cool, yeah!"

North went on to rap as models walked around her on the catwalk, saying “Cool, cute, cool, yeah! Word up!” and shouting “What are those?” North also mentioned her cousin Penelope ― daughter of Kourtney Kardashian and Scott Disick ― saying that she loved her and then complimented her shoes.

Kanye West joined his daughter on stage mid-performance, but she just kept on facing her legions of fans and doing her dang thing. Proud mom Kim Kardashian shared the exciting experience to her Instagram Story, but later received a bit of criticism suggesting that North's performance wasn't totally original.

North's rap was arguably similar to one by young social media starlet ZaZa, who has gained quite the following and even performed on The Ellen Show. ZaZa's parents voiced their concerns in an Instagram post and asked Kardashian and West to credit ZaZa if they perform her songs.

"We take PRIDE in creativity, and believe whether a child's involved or an adult... creativity deserves RESPECT/homage!" the post reads. "What @kimkardashian (Kanye west) are doing with their daughter... with the inspiration of ZaZa & our family in mind is okay... we not mad BUT PLS SHOW LOVE AND SUPPORT TO THE ORIGINAL FIRST!!! We admire Kanye west, and adore his journey. However, we don't wanna feel like our daughter's journey in the world of entertainment is being STIFLED."

But Kardashian was quick to respond to the post. "We love you, North is a huge fan and records in the studio all the time with her dad and is inspired by ZaZa and loves Lay Lay too!" she commented. "Today's performance of North's remix of ZaZa's song was something she asked to do at the last minute and a complete surprise. I didn't mean to not give credit where credit was due. Would love for the girls to meet soon."

In a tweet, Kardashian praised North's performance and shared a couple of adorable photos of the starlet. "I'm so proud of my Northie!!!!!!" she wrote. "Her 1st performance had me in tears! She had an impromptu performance on stage at her dads Yeezy Season 8 fashion show! Shout out to Zaza!!! @redcarpetZaZa North hopes you like the remix!!!"

Fortunately, the famous family avoided another celebrity feud when ZaZa's parents responded to Kardashian on their Instagram Story, writing, "All love, all good." With the confusion behind them, I'm holding out for a Zaza/North West collaborative album.