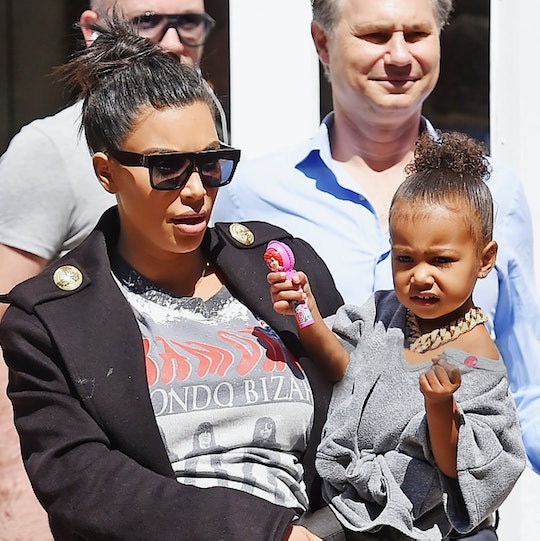 Animal lovers aren't happy with Kim Kardashian. The reality star posted a photo of daughter North West in a fur coat, and the possibility that it's real fur is sparking outrage. The otherwise-casual ensemble includes sneakers, a baseball cap, and jeans; it's the coat that sends it over the top. The photo is captioned "Swag" on Facebook and Twitter, and the image already has over 1 million likes on Instagram.

Kardashian hasn't confirmed whether the fur is real, but Elle spotted another photo appearing to show West wearing the fur coat in New York. Even then, Page Six consulted with experts from Kaufman Furs and found out that West's outerwear may be a $3,500 crystal fox fur coat.

This isn't the first time Kardashian's gotten into trouble over fur clothes. In May, People reported that Kardashian was met by anti-fur protesters when she held a book signing at a New York City Barnes & Noble. An estimated 10 activists called her a "murderer" for wearing real fur. According to People, Kardashian "does have a ton of fur pieces in her closet, from a pair of rabbit-fur-lined Céline sandals to that infamous furkini, which husband Kanye West styled for one of the couple’s impromptu vacation photo shoots in Montana." In this case, here's the coat in question:

Kardashian's decision to wear fur may be questionable, but some Twitter users wonder whether it's fair for her to add similar pieces to her daughter's wardrobe. Twitter users say North West is too young to understand the politics involved in wearing fur:

Though it's likely that the adults in West's life decided how to dress her, much of the criticism is directed at the 2-year-old. Ashley Austrew of Scary Mommy doesn't think that's fair:

North’s coat may be a bad choice, but keep in mind these comments are talking about a child. Hundreds of people are railing on about the treatment of animals while posting on the very permanent internet that a two-year-old is a monster, spoiled, a brat, despicable, and looks like a boy.

Wearing real fur may not be a humane choice, but it's troubling to see a lack of humanity toward a girl who isn't even in Kindergarten yet. For now, it seems important to wait for confirmation from the Kardashian clan that the coat is real fur; without that, criticism could be unfounded. That being said, the photos of West's coat do raise an important question: Is it fair to dress kids in fur when they don't understand the implications?

If the answer is "yes," then it would raise concerns about other actions where children and involved and ethics come into play, like eating meat or using products that are tested on animals. For now, the answer is unclear, but this isn't: West is 2 and shouldn't be condemned for something she doesn't yet understand.

More Like This
North West Flips The Bird During Family Photos
Yellowstone Season 5 Officially Has A Premiere Date
Meghan Markle Calls On Men "To Be Vocal" In The Aftermath Of Roe v. Wade Ending
Elmo Talks About Getting His Covid Vaccine In A Cute New Video