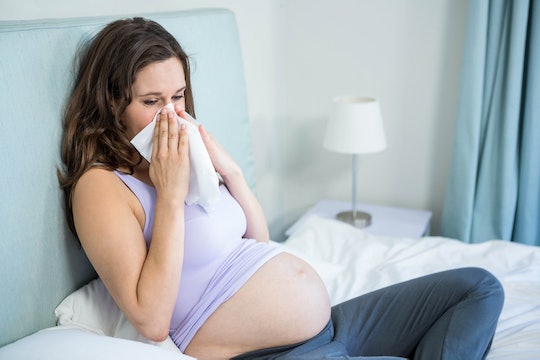 If Your Nose Bleeds Out Of The Blue During Your Pregnancy, Don't Freak Out Just Yet

Sometimes it seems like they should just rename pregnancy "nine months of weird symptoms" because it can feel like every time you turn around, there's something else you need to Google. While most of those weird symptoms are completely normal, they're just out-of-the-ordinary enough to make you want some reassurance before you go about your pregnant business. So, you might have cause to wonder, what does it mean if you get nosebleeds during pregnancy? Because that symptom can be a bit alarming if there's not an obvious cause.

Actually, getting nosebleeds during pregnancy is fairly normal, especially during your second trimester. The Mayo Clinic offered that needed reassurance: "During pregnancy, your hormone levels increase and your body makes more blood. This can cause your mucous membranes to swell and bleed easily, resulting in stuffiness and nosebleeds." Unless you're getting nosebleeds more than occasionally, you can rest assured that it's a pretty normal symptom of pregnancy.

Additionally, they offered one key suggestion that could help mitigate the frequency of nosebleeds during pregnancy: Use a humidifier at home. "The moistened air will help decrease your chances of a nosebleed while pregnant," they explained. You're more likely to get nosebleeds if you live in a dry climate or are pregnant during the winter, so a humidifier in those conditions is especially important.

Since it's probably been at least a decade or two since you had a nosebleed on a playground or soccer field, you're probably also wondering exactly what the heck you're supposed to do when you get a nosebleed. That means it's time to end the age old debate of whether to tip your head back or forward to stop the bleeding. Thankfully, the Harvard Health Blog broke it down: "Nod your head forward. This prevents the flow of blood from going down the back of your throat." There you have it, folks, the debate finally put to rest.

Now, once you have your head slightly tipped forward, you've got to master the special nosebleed pinch, as explained by Dr. Mary Pickett, an instructor in medicine at Harvard Medical School. The Harvard Health Blog reported Dr. Pickett's nose pinch steps in the following way. Essentially, you want to pinch with your thumb and forefinger on either side of your nose, right at the spot "where the bones give way to cartilage." You'll want to pinch "with enough pressure to press both sides of your nose firmly against the septum." They further explained that the tissue on either side of your nose will put pressure on the blood vessel doing the bleeding, and if the bleeding slows or stops, you've mastered the trick. If not, they suggest starting those steps over again.

Even though the blood may slow or stop, you'll want to hold your nose pinched for at least five minutes before letting go, lest you risk a relapse of your nosebleed.

While most pregnancy nosebleeds are normal, there are a few conditions that warrant a call to your doctor. The APA listed high blood pressure, substantial blood flow, and a persistent nosebleed even after continuing the pinching steps as reasons to seek professional medical advice. While pregnancy nosebleeds are normal, they should still be relatively mild. If you experience something more severe, make sure to get this unexpected pregnancy symptom checked out.