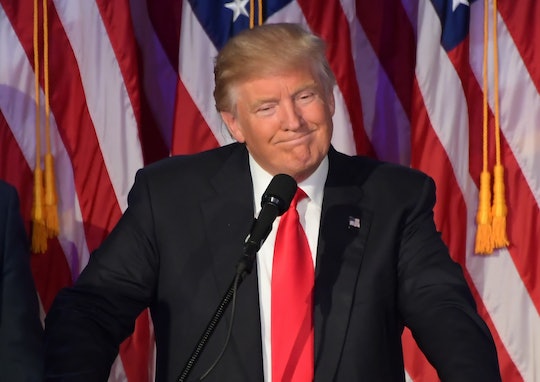 "Not My President" Tweets Show Just How Controversial Election Night Was

Tuesday was an eye-opening evening. For those that thought it would go smoothly were sorely mistaken. Not only was this one of the closest elections ever — a cliffhanger, as we heard about a million times — but it also marked an election that will probably never not be in the news for the next four years. The results are, for lack of a better word, controversial. The tweets and the responses online prove that some people are having a tough time accepting the results of the election. Donald Trump is the president-elect, that is true, but some people are choosing to say that Donald Trump is "not my president" on Twitter — proving just how ugly this election got.

No matter what the results were going to be, Donald Trump's election night mentions were going to be on populated, to say the least. Whether he won or lost, people were going to have something to say, just like the entire election season. But, the inclusion of "not my president" tweets proves that this is one election result day that people are not going to accept — in fact, it wouldn't be that surprising if people started working against Trump's new president-elect title the day after the election. People are passionate, and these tweets prove it.

Some People Are Using The Phrase To Take A Stand

Some See The Irony And Call-Out To The Birther Movement

Some Celebrities Are Joining In

Others Are Pointing Out The Damage Behind The Phrase