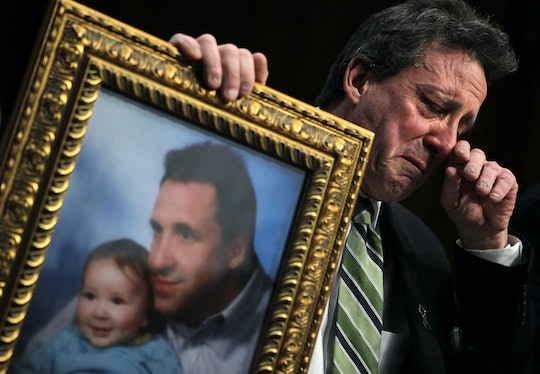 Here’s How Much Your Child’s Life Is Worth, According To The NRA

I'm staring at the features on my 3-year-old son's face as he plays haphazardly with mismatched Legos. The curve of his nose. The plump of his cheeks. The brown in his wide eyes. The little body I once carried inside me, and then in my arms, is now out in the world, oblivious to the dangers. Dangers like the one Don Lemon of CNN is discussing in the background and as my son sits beside me, blissfully unaware of what happened: another deadly school shooting, the 18th in 2018 alone.

I just sent out applications for pre-kindergartens in the area for my son to start attending school in the fall. And now I'm fighting the urge to withdraw those applications and research homeschool options. In the end, is my son's life worth a public school education? Is it worth someone's right to own semi-automatic weapons? In this country, apparently the answer is yes. As parents, police, and school officials are left combing the wreckage for clues about how this could have been prevented, we can scratch together a picture of the exact worth of our children. Political inaction on this topic is almost surely tied to the significant ongoing donations by the NRA to political campaigns, the result of which are that deadly school shooting after deadly school shooting is answered with thoughts and prayers and nothing more.

So far, during the exceedingly short 2018 election cycle, the NRA has given $264,596 in contributions to individual congressional candidates of the two major political parties, and super PACS, according to the Center for Responsive Politics, a non-profit, nonpartisan research group that tracks the effects of money and lobbying on elections and public policy. And as of Feb. 15, 2018, 19 students have been shot and killed while in school, with many more injured or having died of suicide on school grounds from a gunshot wound.

If you were to divide the NRA's campaign contributions (x) by the number of innocent lives lost (n), according to the basic algebra principles some of the students at Marjory Stoneman Douglas High School could very well have been studying when the 19-year-old suspect pulled the fire alarm on Valentine's Day, you would find the amount of money (y) our elected officials, and the NRA, have calculated as the value of a child's life.

The formula is: x/n = y, where n is an acceptable price of doing business as a politician.

That is how much our children are worth in the this country. That is the price we've decided to pay for the extended careers of politicians, and as we fail to fight for the freedom for our children to attend school without the fear of being shot to death, or holding their best friends as bullets fly by their heads, or hiding in closets while they text what could be their last words to their parents.

That is how much my son, with his button nose and his plump cheeks and his wide eyes, is worth to our elected officials, who are so quick to offer thoughts and prayers to the victims and their families, but do nothing when asked to pass common sense gun laws — like universal background checks, including background checks at gun shows, and a ban on AR-15-style rifles — that would affect real change on a culture ravaged by senseless gun violence.

More than 400 people have been shot in over 200 school shootings since the massacre at Sandy Hook Elementary School, according to The New York Times. After a gunman shot and killed 20 first graders and six adults with an assault rifle, we, as a nation, were stunned and horrified and vowed to "do more." We told ourselves, in public and private, that we wouldn't allow our children dying in their classrooms to become commonplace. This wouldn't be the legacy of the United States. This wouldn't be the "price of freedom."

But it is commonplace. This is the price of "freedom" in this country. This is what we've decided is "normal." In fact, you can almost script the response to any school shooting. We provide our thoughts and prayers. We argue about common sense gun laws. We blame mental illness. Many of our politicians "pray for the victims" and urge us to avoid political debate. And, a day, a week, or a month later, we forget.

According to Politico, gun rights groups gave $5.9 million to Republican campaigns in the 2016 election cycle. Those same groups gave $106,000 to Democrats. In 2016 more than half of the members of the House of Representatives received money from the NRA and Gun Owners of America. While 80 percent of Democrat voters and 54 percent of Republican voters are strongly in favor of banning assault-style weapons, a 2013 proposed ban on assault weapons — like the AR-15, the weapon used by the men who killed 49 people in a club in Orlando, 25 people in an elementary school in Sandy Hook, and 17 high school students in Florida — failed, with both Republican and Democrat assistance. And while 90 percent of Democrat voters and 77 percent of Republican voters are for background checks for private sales and at gun shows, per Pew Research data, only six states require universal background checks on all firearm sales at gun shows, including sales by unlicensed dealers.

When you follow the money, and how that money has enabled politicians to forego enacting public policies that could protect citizens, it's no wonder that the 19-year-old shooter who allegedly murdered 17 people at Marjory Stoneman Douglas High School was able to legally purchase the AR-15-style rifle he used to carry out the deadly attack, according to the Associated Press. Federal law allows people 18 and older to legally purchase semi-automatic guns.

Moments after news of the shooting on Valentine's Day, Senator Marco Rubio tweeted the quintessential "thoughts and prayers" tweet we've come to expect from our elected officials. "Today is that terrible day you pray never comes," Rubio said. But Rubio has accepted $3,303,355 over the course of his career as an elected official, and received an "A+" grade from the NRA during the 2015-2016 election cycle.

During President Donald Trump's address to the nation the following day, he urged Americans to "answer hate with love and cruelty with kindness," telling the people he has sworn to protect and defend that "we hold onto God's word in Scripture: 'I have heard your prayer and seen your tears; I will heal you." But during Trump's presidential campaign, he received over $21 million in NRA donations, backing his candidacy. During his speech, Trump didn't mention the word "gun" once.

"Praying this day never comes" is not enough. Holding onto the promise of Scripture as parents identify the bodies of their murdered children, is not enough. If thoughts and prayers could end systemic gun violence, these days would stop coming. Parents wouldn't have to hug their children tight and tell them they love them every single time they drop them off at school for fear those will be their last words to the babies they raised. Students wouldn't have to pick up the pieces of their shattered childhoods, forced to grow up in the wake of such immense loss because people believe the second amendment protects the right for civilians to own military grade weapons.

And I wouldn't have to stare at my son, burning the features of his 3-year-old face into my memory, afraid that one day he will be taken from me and I will be forced to see him only in the corners of my mind. And all because this country believes he's worth $13,926 and change. For us parents, our children are worth the world. And for 17 parents, the world came to an end yesterday.