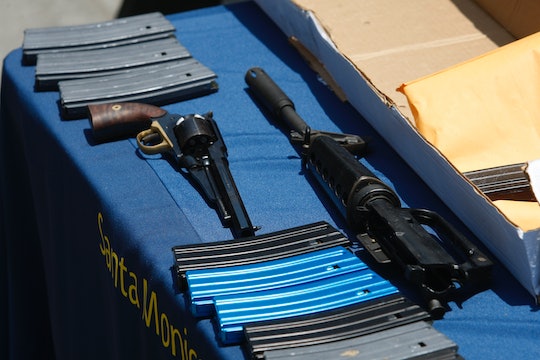 Days after the deadliest mass shooting in recent history, America's contentious feud over gun control may actually be making some progress. According to Reuters, the NRA said anyone on a terrorism watch list who tries to buy a guy should be investigated by the FBI, and the sale should be delayed. In the past, the National Rifle Association has responded to mass shootings by deflecting the blame from guns, instead bringing up the poor state of mental health care or even violent video games, according to NBC News.

House Democrats have been calling for legislation to ban suspected terrorists from purchasing guns for some time now, according to CNN, but have been continuously thwarted by Republicans. But now, after 49 Orlando night club patrons were killed on Sunday, it seems like the argument has reached its tipping point. Even presumptive Republican presidential nominee Donald Trump, who claims that his opponent, former Secretary of State Hillary Clinton wants to "abolish the second amendment," can no longer defend America's lack of gun control legislation. On Wednesday morning, he tweeted that he would be meeting with the NRA to discuss stricter gun control for suspected terrorists or those or the "no fly" list.

On Monday night, after House Speaker Paul Ryan called for a moment of silence in Congress to honor the Orlando shooting victims, some Democrats walked out, while others began shouting in protest, "Where's the bill?" as reported by NPR. On Tuesday, Illinois Rep. Bob Dold broke with the Republican Party to call for gun safety measures. "In short, there are numerous commonsense proposals that will keep guns out of the hands of those that should not have them, while protecting our Second Amendment rights,” Dold said, according to The Hill. "Thoughts and prayers are not enough. And it’s time for action."

On Wednesday afternoon, Politico reported that Connecticut Sen. Chris Murphy had begun a filibuster, vowing to "remain on this floor until we get some signal, some sign that we can come together." Murphy has been advocating for gun control in the wake of the Sandy Hook Elementary School shooting in his home state in 2012. He began his filibuster at 11:20 a.m., and was immediately backed up by Connecticut Sen. Richard Blumenthal and New Jersey Sen. Cory Booker. The Democrats are refusing to yield the floor until a compromise can be reached. "I’ve cleared my entire day," said Booker. The filibuster is being livestreamed on C-Span.