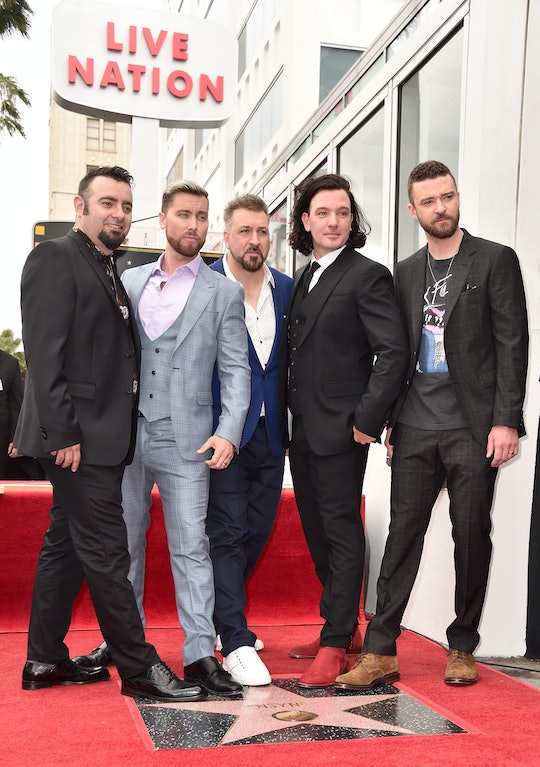 As a millennial, I am totally digging all of the 90s nostalgia popping up left and right. It's like I blinked and all of the sudden, the Tamagotchi is cool again, the Spice Girls are back, everyone is wearing a fanny pack, and all of the boy bands are re-living their glory days. It makes sense, if you think about it: Millennials are all grown up, (the oldest of us are rapidly approaching 40!) and we're looking for things that give us all the feels from our childhood. With this in mind, I'm sure plenty of 20- and 30-somethings will be excited to hear that NSYNC might actually be reuniting.

Yep, you read that correctly. But first, let's back it up a bit.

As E! Online reported, NSYNC reunited in April during Ariana Grande's set at Coachella. Well, everyone except Justin Timberlake, that is. Chris Kirkpatrick, Lance Bass, Joey Fatone, and JC Chasez tore it up alongside Grande during a performance of "Tearin' Up My Heart." And unsurprisingly, the crowd went wild.

Even JT himself — who couldn't make it because he was finishing up his Man of the Woods Tour in Connecticut — sung the praises of his former bandmates, according to ET Online. "You guys killed it last night 🙌," Timberlake wrote on Instagram, along with a photo of Kirkpatrick, Bass, Fatone, Chasez, and Grande.

As a result, the long-awaited NSYNC comeback could actually be happening in the near future. “We haven’t talked about what the next step is but I know we’ll sit down during the summer together and figure it out,” Lance Bass recently told Variety. “There are many, many things coming across our desk because of Coachella that we would be stupid not to discuss and look at. He continued:

Coachella was incredible and it was a big moment for ‘NSYNC. People are really into nostalgia right now. They’re really digging the 90s and early 2000s again, and I think fans just want to feel that innocence and excitement again.

Let's just say Twitter had a lot of feelings about the possibility of an NSYNC reunion. One person tweeted, "Who’s going to be there?!?" along with a GIF of JT singing, "It's gonna be may!"

Still, others maintained it just wouldn't be the same without Timberlake. One Twitter user declared, "No Justin = No reunion."

Another person commented, "If JT isn’t coming to that meeting, don’t even bother."

Although fans have been calling for a reunion for years, it finally seems like it might happen soon — with or without Justin Timberlake. Fatone also addressed the subject earlier this month. "We have to have the conversation, even with Justin. The whole thing about it is it’s really awkward. It’s not awkward, but it’s weird,” he told Us Weekly. “People will be like, ‘If Justin doesn’t do it, the group’s not gonna do it.’ That wasn’t even the case. That’s not even the conversation. Everyone’s heads are in different times and different places in our lives.”

To me, an NSYNC reunion just makes sense. I mean, the Backstreet Boys have done it. The Spice Girls are doing it. And New Kids On The Block have been at it for years. So why not NSYNC? Justin definitely needs to get on board with this. (Hear that, JT?) Still, I won't actually believe a reunion is happening, until I see NYSNC tour tickets for sale.