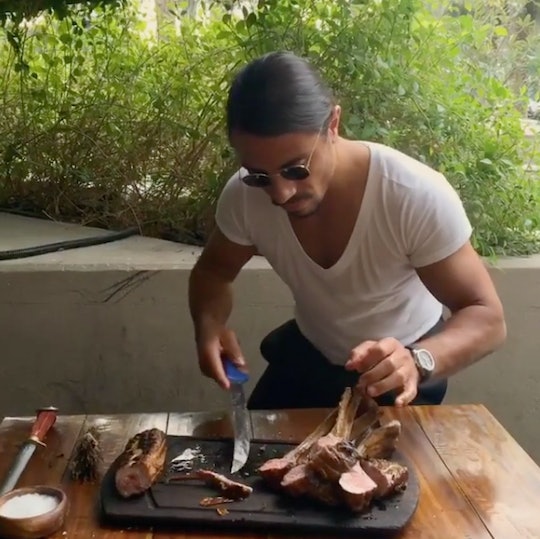 Nusret Gökçe, Salt Bae, Is More Than Just A Meme

It has only been four weeks into 2017 — but the new year has already gifted us with plenty. 2017 brought the introduction of "Salt Bae," an international viral cooking sensation now notoriously known for his stylish panache while salting meat. But before he became an internet sensation, Salt Bae — whose real name is Nusret Gökçe — was just a hardworking chef — and it is important to recognize that Nusret Gökçe, or Salt Bae, is so much more than a flashy, sexy meme — he is a hardworking businessman and chef, and at the end of the day, deserves more respect than a barrage of overtly sexualized comments on social media can ever give.

Gökçe, a Turkish chef, found his viral success from an Instagram video where he ferociously chops a steak off of a bone and salts it. The video now has over 7.4 million views on the social media platform. According to People, some were enraptured by his wardrobe — his simple t-shirt and round glasses — and others were attracted to the way he interacts with the food, which has since been described as "seductive" or "sensual."

But Gökçe is worth more than the way he tenderizes meat or salts steaks and he's definitely worth more than his 15 minutes of viral fame. Gökçe is a chef with an extensive career in the food industry and should be treated as such — rather than just being the internet's newest #bae (although, hey, it's okay to still be obsessed with his videos, they're pretty addicting).

In the weeks since Gökçe's fast rise to internet fame, there is only so much people have learned about the Turkish chef based out of Istanbul — but what they have learned is absolutely impressive. Gökçe is the chef and owner of six different steak houses called Nusr-Et, according to Food Diva, with one located at the Four Seasons Hotel in Dubai. And according to New York Magazine, people have traveled far and wide just to eat at his restaurants.

Gökçe's life had a humble beginning — he is the son of a miner who had to leave school early because his family "could not afford to keep him in education," according to The Daily Mail. Gökçe started working as a butcher at 16-years-old, according to Food Diva, and now proudly owns a chain of steakhouses — proving that hard work pays off. Gökçe is also a family man, according to New York Magazine, who reportedly has several children.

At 32 years old, Gökçe has achieved great success in the food industry. That's why reverting to raw objectification (only ever talking about him in sexualized undertones) feels a little awkward on several levels. (For the record objectifying anyone based on their looks isn't fair. If you can't understand the problem, consider what you might say if he were a female chef being subjected to similar comments.) Gökçe is a chef and family man first, and his talent deserves more than just a passing, NSFW comment.

So far, it seems as if Gökçe has embraced his international, viral fame, writing in one Instagram caption "I am so grateful for the love from all over the world. Thank you for your support everyone." He now captions his Instagram videos #saltbae. It's funny and self-aware, but it's also not a free pass for the public to simply sexualize the chef all day long and forget his real-life talents.

Bae or not, Gökçe should be objectified for his looks or movements but rather appreciated for his hard work in the food industry — because really, if you're going to obsess over something on his restaurant's Instagram account, it should be those glorious (incredibly delicious-looking, mouth-watering) steaks, which, thanks to Gökçe's culinary expertise, have been seasoned to perfection.