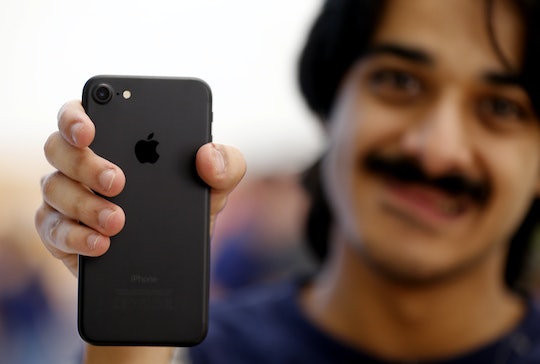 Investigators working through the night to identify the perpetrator or perpetrators of a Manhattan explosion that injured 29 Saturday evening have a lead. Authorities announced Monday morning that they're seeking a naturalized U.S. citizen of Afghan descent in connection with the attack. In addition to plastering his face all over social media, NYC police are seeking the explosion suspect with smartphone alerts as well. "WANTED: Ahmad Khan Rahami, 28-year-old male. See media for pic. Call 9-1-1 if seen," the message blared to all iPhones in New York around 8 a.m., the result of a recently implemented Apple system that allows emergency notifications to override settings that normally stop notifications, The Independent reported. Romper could not reach Rahami for comment.

(Update: On Monday, authorities located and Rahami and took him into custody in an arrest that The New York Times described as "dramatic.")

And if there was ever a more-than-justifiable reason to cut through New Yorkers' do-not-disturb preferences, this is it: The FBI, considers the Rahami to be "armed and dangerous." Though police suspect he was involved in the blast in Chelsea, there's been no confirmation that he played any role in planting a pressure cooker device about five blocks away that did not detonate, a pipe bomb that exploded in a garbage can near a Marine Corps charity run in New Jersey earlier Saturday, and a backpack of intact explosive devices discovered Sunday night in Elizabeth, New Jersey — the same city that's home to Rahami's last known address.

Only the attack in Chelsea claimed any victims (all of whom have since been released from hospitals), but the terrorist's or terrorists' intention to maim and kill as many Americans as possible while injecting debilitating fear into society is clear.

The spate of incidents involving explosive devices suggests to authorities that a terror cell working in both New York and New Jersey may be responsible, law enforcement officials told CNN Monday. Rahami is wanted for questioning in relation to each of these, and ABC News reported that a Sunday night traffic stop in Brooklyn had resulted in the arrest of as many as five people as part of the investigation. The FBI tweeted just before 11 p.m. that none of those taken into custody had been charged with a crime, however. NBC New York reported that these people were believed to be "relatives or associates" of Rahami.

The Next Web reported that the emergency alerts associated with the Chelsea bombing mark the first time that the emergency alert system has been used to aid in the search of a wanted suspect. On Saturday, it also alerted people to be on the lookout for suspicious packages after the Saturday bombing — but before Monday, AMBER alerts, weather warnings, and crisis situations had dominated the system.

Police believe that a man seen in surveillance videos with a rolling duffel bag near the scene in Chelsea is Rahami, according to CNN. At least one of the images of him they've released is from this footage. The goal is that that, along with the alerts, will aid uncovering the information and clues that will aid in his capture and arrest.