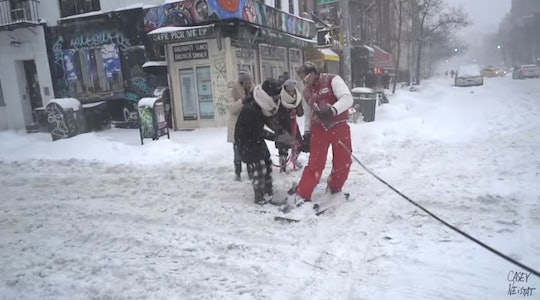 Other people may have been busy eating copious amounts of bread and milk during the 2016 blizzard, but not NYC snowboarder Casey Neistat. The YouTube star wrangled a couple of friends, put some chains on his truck tires, and strapped on his snowboard boots. Because why head to the mountains if the snow comes to you? Snowboarding in New York City sounds like the best possible use of a blizzard, if you ask me.

Neistat's antics in New York have already gained him plenty of attention. In 2011, after receiving a $50 fine for riding his bike outside of the designated lane, he uploaded a video of himself crashing into cars, construction barriers, and trash bins in the bike lane, which propelled him into viral YouTube star territory. This winter, he swapped his bike for a snowboard and, despite a driving ban on the streets of New York, cruised behind a truck, gaining high-fives, new friends, and plenty of ogling passerby.

Eventually, the truck and snowboarder passed by a cop car, which immediately flipped on its lights. Rolling down his window in response, Neistat's driver replied, "Yes, officer?" To which the awesome NYC cop replied, "Someone complained about you, so we’re just gonna act like we’re talking to you, alright?"

Elsewhere in New York, other people were also taking advantage of the snowpocalypse. Some people chose to go with the obvious jokes, because hey, it's Winter Storm Jonas and it would be a tragedy to ignore that.

Tourists weren't dissuaded from visiting Times Square during the storm, either, and a snowball fight quickly broke out. I have a feeling this is a much better use of the space, too, considering that the alternative is having way too many flyers handed to you by superheroes.

The police who stopped Neistat weren't the only ones to have fun during winter storm Jonas. In DC, a group of officers joined a snowy game of pick-up football:

They weren't the only ones, either. Apparently swimmers are also badasses.

Despite the chilly antics, it looks like the storm has finally passed and there's clear skies in the city, and luckily so — Winter Storm Jonas dumped over a season's worth of snow on the East Coast over a single weekend and definitely left quite a few adverse effects everywhere it touched. However, it was awesome to see people making the most of the extreme weather — and while you should of course abide by travel bans and stay safe, I did think Neistat's winter adventure was awesome.

Watch the full video below: