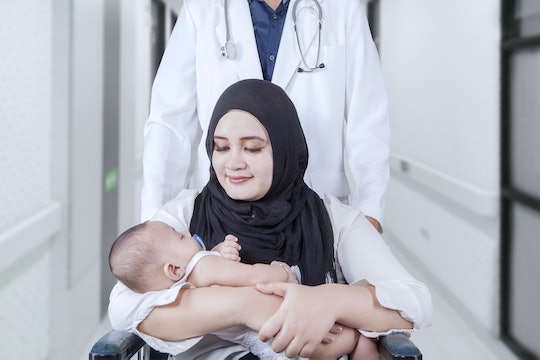 You Should See Your OB-GYN Sooner & More Often After Giving Birth, ACOG Says

On Monday, a report released by the American College of Obstetricians and Gynecologists confirmed what a lot of new moms know already: they need more support after having a baby. OB-GYNs should see new mothers sooner and more often, according to new guidelines from an ACOG task force, and the experts behind the report had a lot to say about the matter. The committee opinion released by the ACOG is 11 pages long, and noted that providers, insurers, and patients need to work together more to improve care for women after they give birth.

In the report, ACOG suggested new recommendations to better care for new mothers postpartum. "Optimizing Postpartum Care," available on the organization's website, states that "to optimize the health of women and infants, postpartum care should become an ongoing process, rather than a single encounter," and goes on to explain how care providers and insurers can help to make that happen.

At the very least, the opinion read, every women should have contact with a maternal care provider within the first three weeks postpartum, and that first assessment should be followed up with ongoing care. New mothers should also have a "comprehensive postpartum visit" no later than 12 weeks after they give birth, and that visit should involve "a full assessment of physical, social, and psychological well-being," according to the report.

New moms can be vulnerable after giving birth, and pregnancy-related deaths occur more commonly within 42 days of the end of a pregnancy (45 percent) or from 43 days to one year after a pregnancy ended (17.5 percent) than before the end of a pregnancy in the United States, according to a new CDC Foundation report. So if we know that women can be in danger of health complications after giving birth, why isn't there more support and more opportunity for new mothers to check in with their doctors?

ProPublica noted that there's a tendency to focus on the health and safety of a fetus or baby more than that of the mother in the American health care system. Alison Stuebe — who teaches in the department of obstetrics and gynecology at the University of North Carolina School of Medicine, and who led the task force that drafted these guidelines — told ProPublica:

There's definitely a difference in the medical care a woman gets before giving birth and after, according to NPR, which co-published the piece. During the prenatal period, a pregnant person may see their OB-GYN several times, including two checkups at the very least during their ninth month of pregnancy. But a new mom might not have a follow-up appointment with her doctor until four to six weeks after delivery — a stark contrast.

Plus, in a lot of cases, insurance only covers one postpartum visit for moms. Tamika Auguste, associate medical director of the MedStar Health Simulation Training & Education Lab in Washington, D.C., and a coauthor of the ACOG piece, told NPR:

As soon as that baby comes out, [the mom] is kind of an afterthought.

The ACOG opinion noted that insurance coverage policies should line up with new recommendations for more visits and “fourth trimester” care. It also stated that providing paid parental leave is "essential" to further improving the health of women and children. In the report, the ACOG authors alluded to the idea that supporting moms during the postpartum period isn't just a matter of changing health guidelines, but one of access and income concerns as well.

In fact, as many as 40 percent of women don't go to a postpartum visit at all, according to the 11-page ACOG piece. "Attendance rates are lower among populations with limited resources," the opinion read, and ProPublica reported that that includes low-income women of color. Auguste said, according to ProPublica:

You may have a woman that has asthma, is having problems lactating, and is obese, and when they come to see you at six weeks, we have missed the boat here.

Under these new guidelines, women would see their doctors much earlier. A visit would occur within three days postpartum if the person suffered from severe hypertension, and by no later than three weeks after giving birth if their pregnancies and deliveries were typical.

The March of Dimes commended the ACOG for recommending earlier check-ups and more frequent visits to a doctor for women after they give birth. The organization said that those visits might "help identify many dangerous conditions and ensure women get the care they need."

During the final recommended "full assessment" visit previously mentioned, all of the following should be addressed, according to the ACOG report:

ACOG also recommended that providers talk to their patients about the long-term health risks associated with pregnancy complications like preterm delivery, preeclampsia, gestational hypertension, or gestational diabetes. Certain risk factors are good predictors of "future arteriosclerotic cardiovascular disease (ASCVD) risk," the guidelines noted, and doctors might not be communicating the increased risk to women in an effective way.

The crux of these new guidelines is basically this: new moms need to see their doctors earlier after giving birth, they need to see them more often, and doctors need to ask more questions of new mothers to make sure they're getting the support, information, and care that they need. Additionally, we have to be sure that that care is accessible, and provided to all populations.

The ACOG opinion concluded that all obstetric care providers "should be in the forefront of policy efforts to enable all women to recover from birth and nurture their infants." And I think we can all get behind that goal.