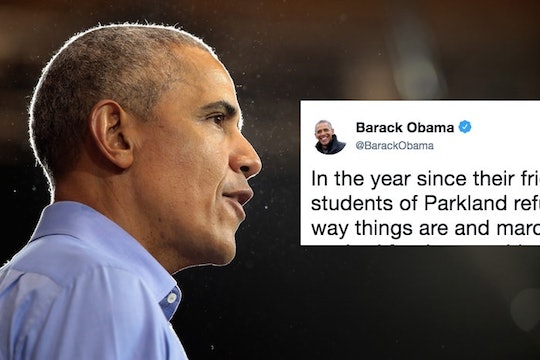 One year ago, news broke that there was an active shooter in a high school in Parkland, Florida. Later, the world learned 17 students and faculty lost their lives, and 14 more were seriously injured. In the time since, the push for gun violence prevention has gotten more amplified than ever. And on the anniversary of the tragic shooting, former President Barack Obama applauded the Parkland students in a powerful, poignant tweet, reminding us just how much action they've taken in the face of tragedy to protect future generations from such senseless acts of violence.

On Thursday, Feb. 14, Obama took to Twitter to express how proud he was of the Parkland students who, in the aftermath of the tragedy, have taken it upon themselves to rally for stricter gun safety legislation — a move that landed some of them on TIME's most influential people list in 2018.

"In the year since their friends were killed, the students of Parkland refused to settle for the way things are and marched, organized, and pushed for the way things should be," Obama wrote on Twitter. "Helping pass meaningful new gun violence laws in states across the country. I'm proud of all of them."

Earlier last year, he and former first lady Michelle Obama issued a handwritten letter to the students, expressing their support as well. “Not only have you supported and comforted each other, but you’ve helped awaken the conscience of the nation, and challenged decision-makers to make the safety of our children the country’s top priority,” Rolling Stone reported the Obamas wrote. "Young people like you have led the way in making America better."

So what's different now than it was then?

First, Florida passed the Marjory Stoneman Douglas High School Public Safety Act, the Tampa Bay Times reported, raising the purchase age to 21 from 18, banning people legally judged “mentally defective” from purchasing a firearm, and setting up a system for guns to be taken from people deemed a threat.

Other states quickly followed suit, with Washington passing background check laws, The Seattle Times reported, New Jersey banning armor-piercing ammunition and limiting magazine quantities, according to NJ.com, and Louisiana issuing legislation that requires those with backgrounds of domestic abuse to give up their weapons, as NOLA.com reported.

In total, 11 states passed legislation that limits, restricts or puts regulations on gun sales and ownership, according to Fast Company. Nationwide, Congress recently moved to pass legislation that would likewise issue regulations on gun control, as The Washington Post reported, though of course a movement is not the same thing as having passed a law. Regardless, there's reason to remain hopeful.

Despite the advocacy — and reforms which have been successfully passed — it's clear that gun violence is still a major issue in the United States. According to Vox, many trace the issue back to 2012, when a shooter in Sandy Hook Elementary School in Connecticut killed 20 children, six adults and then, himself.

If that's not jarring enough, the numbers beyond are striking, because aside from what happened in Parkland, Vox reported that there have been nearly "2,000 shootings in which four or more people, excluding the shooter, were shot," totaling more than 2,200 dead and 8,200 wounded.

It's clear that right now, the United States is polarized over this hotly debated issue, but it shouldn't come with too much surprise. It's become wholly evident over the past handful of years that the country remains divided on issues that can pose major threats to the safety and security of its citizens, which is why it is so important to keep talking about the facts, and pushing for safer laws and comprehensive reform.