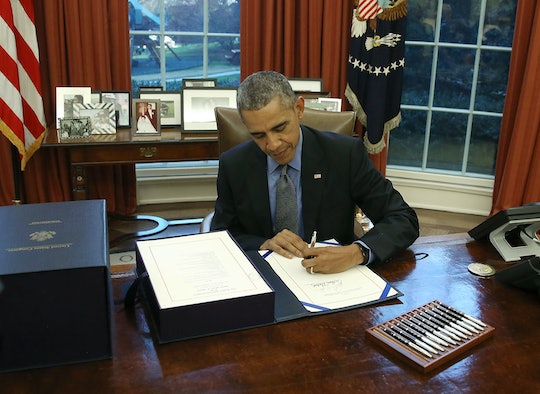 President Obama's 2017 Federal Budget has arrived and it looks like, in the last year of presidency, there are some major proposed cuts in the budget to be made. Among the programs that Obama wants to be eliminated from the budget, such as environmental or agriculture grants, is one big cut sure to draw up some controversy as more states begin to vote in their primary elections. So what is the program in question? Obama made cuts to abstinence-only sex-ed funding — and it's about time.

According to the Sexuality Information and Education Council of the United States, Congress has spent over $1.5 billion dollars on abstinence-only programs in the past 25 years, and yet no study in any professional and peer reviewed journal has found these programs to be effective. In other words, even science can't provide proof to back up the claim that teaching abstinence in the classroom has any effect on students or will stop them from having sex.

However, despite the likeliness of the GOP fighting this cut, there are some states out there that are working to fight against abstinence-only education and promote safer sex instead. In October 2015, California Gov. Jerry Brown signed a bill into law that that will require all schools in the state to teach comprehensive sex-ed starting in 2016. The schools are to address topics in an unbiased, accurate, and inclusive manner.

From now until Oct. 1, Congress will debate this cut, along with others in the proposed budget and decide whether or not it gets passed. If the proposed cut does not get passed, if anything, this sets a tone for other politicians to be a bit more practical when it comes to abstinence-only education and take a look at why abstinence-only education has not worked and why comprehensive sex-ed would.

It is about damn time someone pays attention to what kind of education our generation and current generation could benefit from. Abstinence-only education, with its old fashioned values of assuming teenagers are going to abstain from having sex until marriage, is just not current anymore.