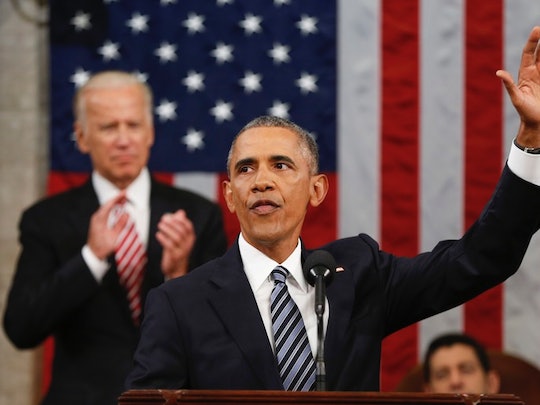 Obama Doesn't Mention Women Once In State Of The Union, And It's A Surprising Oversight

President Barack Obama's final State of the Union speech talked about all the things that have changed since he came into office in 2008. He talked about the strength of the economy following a dismal recession, the progress made against our enemies abroad (with an Osama Bin Laden mic drop moment, of course), and the overhaul of our nation's approach to health care. He talked about all he and his administration have accomplished and those things that he wishes to still accomplish, and he lamented that he was not better able to overcome the partisanship that at times paralyzed the political process. But one thing that Obama did not talk about in his 2016 State of the Union speech? Women. Obama didn't so much as utter the word "women" once during his hour-long speech — which is a surprise and an oversight from a president who has been an avid advocate for gender equality.

Obama has been a vocal supporter of women throughout his presidency. He's advocated for the end of ineffective abstinence-only sex education and has stated deep commitment to protecting women's access to contraception and safe, legal abortions. His administration has launched campaigns meant to eradicate sexual assault on campus, of which women are predominantly the victims. He's called for a higher minimum wage, which would largely benefit single mothers. He's signed executive orders meant to eliminate the gender pay gap. So with this strong track record with regards to women's issues, and in the face of candidates who seek to undermine gender equality, why didn't Obama see this as an opportunity to set the course, or lay down the gauntlet, for the heir to his presidential throne?

The current Republican candidates for president seek to defund Planned Parenthood and limit women's access to necessary health care. Among them are people who've made derogatory comments about single mothers, voted against legislation that would make it easier for women to report pay discrimination, and made comments about both women's looks, sexual abilities, and menstrual cycles. Obama expressed his hopes that the next administration, and presidential administrations for decades ahead, would solve climate change, address outrageous college costs, eradicate terror, and overcome gridlock. Why didn't he express his hopes for gender equality?

Obama made some mention of issues that do effect women, saying that we need to make progress on the issue of "equal pay for equal work" and that he hopes our planet's current climate of progress and change could mean "education for girls in the most remote villages." But these passing comments didn't seem to take into account the gravity of a situation in which our country's next president very well may roll women's equality and autonomy back by several decades.

Meanwhile, Gov. Nikki Haley of South Carolina closed the Republican rebuttal by saying "Our forefathers paved the way for us. Let's take their values and their strengths and rededicate ourselves to keeping America the greatest country in the history of man... and woman."

To the cynical eye, that line seems like a cheap play to gain favor among female voters without actually acting in their best interests. But, it just might work.