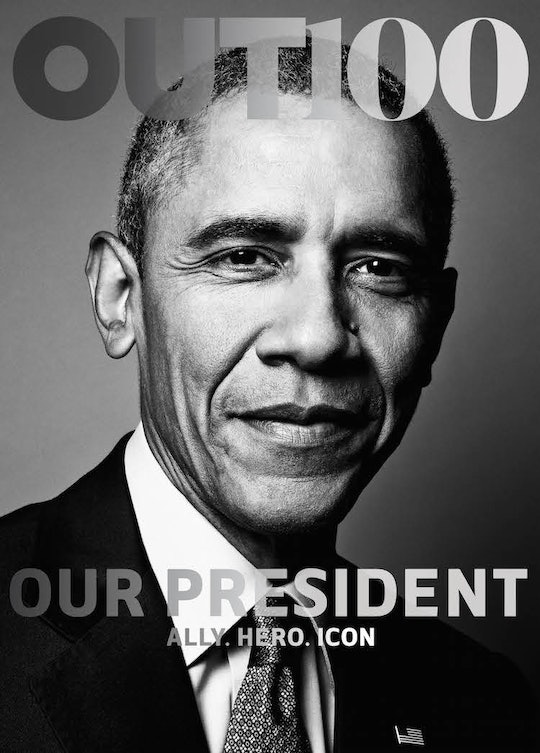 Obama Is The First Sitting U.S. President to Cover ‘Out’ Magazine, & That Matters. A Lot.

LGBT-themed Out magazine has named our commander in chief its “Ally of the Year,” and Obama is on the cover of Out's new issue. That makes him the first sitting U.S. president to appear on  be featured on the cover of an LGBT magazine. In the accompanying story, Aaron Hicklin writes, "President Obama's evolution on marriage equality has been something to behold. He came to office reiterating that marriage was an institution reserved for a man and a woman, and continued to hold that line throughout most of his first term.” While the president eventually came around to support same sex marriage in 2012, he still advanced important LGBT issues during that time, including repealing “Don’t Ask, Don’t Tell,” signing an order prohibiting federal contractors from discriminating on the basis of sexual orientation or gender identity, passing the Matthew Shepard and James Byrd, Jr. Hate Crimes Prevention Act. When Obama took office, same sex marriage was only legal in Massachusetts and Connecticut. As of this past June, it’s legal nationwide.

More Like This
Wait, Did The Government Actually Do Something For Parents?
Bindi Irwin Has Been Sharing The Cutest Photos Of Her Daughter
Tweens Will Be Obsessed With These 20 Podcasts
Here Are 33 Movies For Kids That Aren't Cartoons

In the interview, the president spoke of his friend and former college professor, Dr. Lawrence Goldyn, who he credits with influencing his stance on LBGT issues. “He went out of his way to advise lesbian, gay, and transgender students at Occidental, and keep in mind, this was 1978. That took a lot of courage, a lot of confidence in who you are and what you stand for.”

When asked when he knew that LGBT equality would be a key focus in his administration, Obama said, “Growing up as a black guy with a funny name, I was often reminded of exactly what it felt like to be on the outside. One of the reasons I got involved in politics was to help deliver on our promise that we’re all created equal” … “It’s why, when I ran for president the first time, I publicly asked for the support of the LGBT community, and promised that we could bring about real change for LGBT Americans.”

On Kim Davis and her ilk, who claim they’re forced to choose between their religion and the law: “I am a man of faith and believe deeply in religious freedom, but at the end of the day, nobody is above the rule of law — especially someone who voluntarily takes an oath to uphold that law. That’s something we’ve got to respect.”

Speaking on how his daughters’ views on homosexuality differed from those of older generations, the president said, "To Malia and Sasha and their friends, discrimination in any form against anyone doesn't make sense. It doesn't dawn on them that friends who are gay or friends' parents who are same-sex couples should be treated differently than anyone else. That's powerful.”