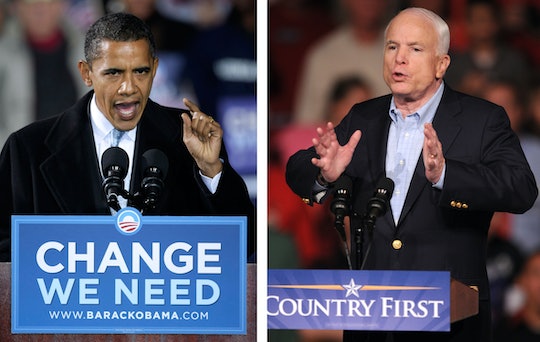 The United States lost a respected veteran, leader, and politician when Arizona Sen. John McCain died on Aug. 25. The senator, who was the Republican candidate in the 2008 presidential election, was a revered party leader by his constituents for his determination and persistence to stand up for his party's beliefs. And his peers, no matter what party they belonged to, saw this, too. On Saturday, president Trump, Obama, and more of McCain's peers in Senate and politics mourned the passing of the senator, taking to social media to remember and honor him.

McCain's family were the first to let people know about the senator's passing. "I love you forever - my beloved father @SenJohnMcCain," McCain's daughter Meghan McCain tweeted on Saturday with an incredibly moving dedication to him. And right after this happened, people from all over shared their condolences for McCain's family — he is survived by his wife, Cindy, and their seven kids. But perhaps what was most special was the condolences from McCain's peers who had a front seat to his career.

Case in point, President Barack Obama, who faced off against McCain in the 2008 Presidential Election. Although the two politicians might have sparred on the campaign trail (and Obama would become president), Obama had the absolute sweetest thing to say about the senator in a statement released on social media, perfectly honoring his life.

When McCain first announced that he had been diagnosed with brain cancer a little more than a year ago in July 2017, Obama was one of the first people to release a statement on Twitter, encouraging the senator to keep fighting. "John McCain is an American hero and one of the bravest fighters I've ever known," Obama tweeted. "Cancer doesn't know what it's up against. Give it hell, John."

His kind words stuck with people, including McCain. This past May, NBC News reported that Obama and President George H. W. Bush were planning "to be the eulogists at McCain's funeral service." Obama's statement after McCain's death gives a glimpse as to what that eulogy might be like.

But Obama wasn't the only person to react to McCain's death. McCain's 2008 presidential election running mate, Sarah Palin, along with president Trump, and other members of the senate all took to social media to remember McCain.

Their words honor McCain's legacy as a politician — one that will be remembered for many years to come. The Vietnam war veteran and prisoner of war was seen as a bi-partisan senator, working with other parties for the best interest of his constituents and people living in the United States, according to USA Today. During his time in the senate, he was able to get the campaign-finance-reform bill passed, among others.

And during the 2008 election, McCain only had nice things to say about Obama when people said otherwise. "He's a decent, family man, citizen, that I happen to have disagreements with on fundamental issues and that's what this campaign is all about," McCain said of Obama, according to USA Today. Statements like these are a true test to McCain's character.

McCain's death came just a day after McCain's family announced in late August that he was discontinuing his treatment for brain cancer, according to CNN. The McCain family said in a statement at the time:

Last summer, Sen. John McCain shared with Americans the news our family already knew: he had been diagnosed with an aggressive glioblastoma, and the prognosis was serious. In the year since, John has surpassed expectations for his survival. But the progress of the disease and the inexorable advance of age render their verdict. With his usual strength of will, he has now chosen to discontinue medical treatment.

Although he might be gone, McCain is certainly not forgotten — his comments from his peers in politics prove that.

More Like This
Barack Obama Says He "Won The Lottery" When He Married His Wife Michelle 30 Years Ago
Serena Williams Shares How Her Daughter Comforted Her After Losing A Big Match
10 Kids’ Shows With Great Potty Training Episodes
Exclusive: Your Favorite Yeti Is Back With More Adventures In New 'Abominable' Series