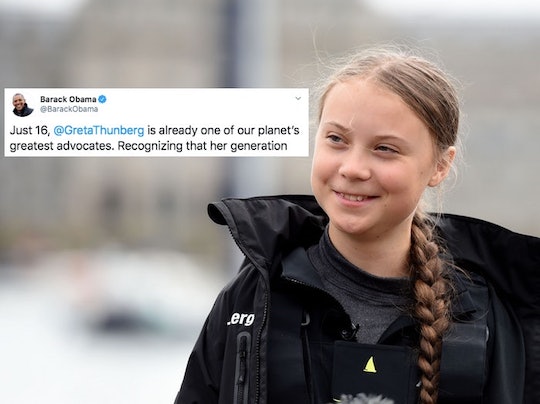 Greta Thunberg is well on her way to changing the world. At just 16 years old, the Swedish activist has continued to raise awareness surrounding the concerning and grim realities of climate change. And she's already gaining attention from some important, notable leaders, like President Barack Obama who praised Greta Thunberg's climate activism after meeting earlier this week. And perhaps unsurprisingly, he's totally impressed with her drive and dedication, just like the rest of us.

Earlier this month, Thunberg traveled to the United States by a zero emission yacht to testify in a joint hearing of two House committees about the "global climate crisis" this week, according to USA Today. She also got to meet with some very powerful leaders. On Tuesday, Thunberg and Obama met to talk about the environment and her desire to make a change. In a video posted on the Obama Foundation's YouTube page, it's clear to see just how inspired the former POTUS is by Thunberg.

In a blog post for the Obama Foundation, Obama wrote that he's moved by Thunberg's leadership and passion. "That's the power of young people — unafraid to believe that change is possible and willing to challenge the conventional wisdom, Greta and her generation are making their voices heard, even at a young age," he wrote. "That's whats possible when we let young people lead the way."

In a tweet written on the same day, Obama acknowledged Thunberg's power to lead and influence others. "At just 16, Greta Thunberg is already one of our planet's greatest advocates," he wrote. "Recognizing that her generation will bear the brunt of climate, she's unafraid to push for real action."

Indeed, Thunberg's activism has spread beyond her home country of Sweden and her messages have resonated with her own generation and beyond. Thunberg is the founder of "#FridaysforFuture", according to USA Today, which is the movement she started, prompting student to take weeks off school to protest outside of the Swedish parliament about the government's inaction towards climate change. This inspired thousands of students from all over the world this past May to walk out of their classrooms and protest climate change, according to TIME.

In March, she was nominated for a Nobel Peace Prize for "launching a mass movement" towards climate change, according to the BBC. And on Wednesday, Thunberg will testify in front of Congress about global climate change.

While world leaders have showered Thunberg with praise for leading a movement, she is looking to them to take action, too. On Sept. 17, Thunberg testified in front of members of the Senate climate crisis task force, where she pleaded with them to do something about global climate change, "Please save your praise. We don't want it," she said, according to the Guardian. "Don't invite us here to just tell us how inspiring we are without actually doing anything about it because it doesn't lead to anything... If you want advice for what you should do, invite scientists, ask scientists for their expertise. We don't want to be heard, we want science to be heard."

On Friday, Sept. 20, young people from all over the world, including Thunberg, of course, will participate in another Global Climate Strike, where they will gather to demand action from their representatives, according to Vox. Thunberg has said this is the day people should show up to show their support, if only to send a message to world leaders about just how important this issue is to future generations.

Considering Thunberg already has the attention of Obama, there's promise that more leaders will listen to her and be just as inspired by her invaluable activism.