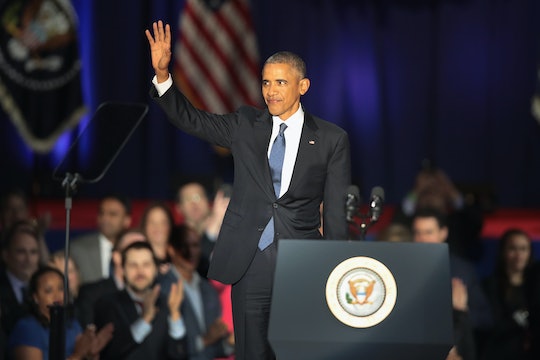 President Obama's farewell address on Tuesday night was all about bipartisanship and which direction he would like to see the country take after he leaves office. Most notably, he addressed the idea of a "post-racial" America, and to make that point, Obama quoted Atticus Finch, showing that he's just as literary as he is presidential.

Atticus Finch is a character in To Kill A Mockingbird (no judgement if you just read the Cliff Notes), and is a lawyer who represents a black man accused of a crime. But Finch is best known as being reasonable and able to look at both sides of an issue. Obama referenced the Harper Lee novel when talking about race during his farewell address, and the fact that when he was elected in 2008 he was supposed to lead a "post racial" nation. He told the crowd in Chicago (and everyone watching) that there is no such thing yet as "post-racial." He said, "race remains a potent and complicit force" in American society.

But that doesn't mean all hope and change is lost. Obama noted that race relations "are better" than they were twenty or thirty years ago. That's true, but after the 2016 election, it was clear to Obama (and to many Americans) that there remains "a lot of work to be done."

He quoted Lee's character, "You never really understand a person … until you climb into his skin and walk around in it."

Obama's point was well made. After an election year that has, by most anecdotal accounts, divided the nation, it was a message worth hearing. For sure, no two men could be any different than the president-elect and his successor. But Obama's message was still, as it has always been, one of unity.

For blacks and other minority groups that means tying our own very real struggle for justice to the challenges that a lot of people in this country face," he said. The outgoing president said, "Not only the refugee or the immigrant or the world poor or the transgender America, but also the middle aged white guy, who from the outside may seem like he's got advantages but has seen his world upended by economic and cultural and technological change. We have to pay attention, and listen.

Calling upon the fictional character in Lee's novel was a great example of how people from very different realities need to value each another in times of controversy.

And at the very least, it's a nice reminder to add To Kill A Mockingbird to your winter reading list and see what the president was talking about.