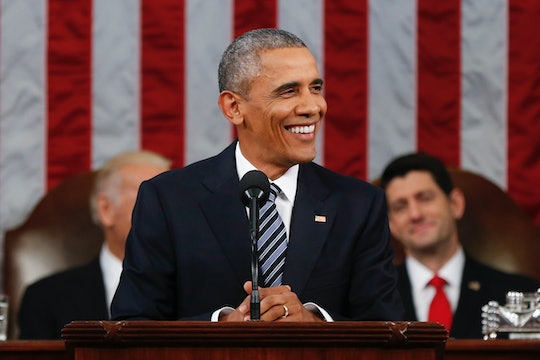 During his seventh and final State of the Union speech on Tuesday, President Barack Obama referenced Friday Night Lights, and it was adorable and hilarious. The reference made it clear that Obama still wants to go down as the president who's most tied into pop culture, and it was a perfect way to cement his lead as the most fun president — but also someone who wants to get things done.

Obama specifically said, "That’s the America I know. That’s the country we love. Clear-eyed. Big-hearted," according to the White House-sanctioned transcript of the speech. And though it wasn't exact, Obama's quote sounded a lot like "Clear eyes, full hearts, can't lose!," which is Coach Eric Taylor's famous line in Friday Night Lights. Obama finished out the line with more serious, inspiring words to the nation:

[I'm] Optimistic that unarmed truth and unconditional love will have the final word. That’s what makes me so hopeful about our future. Because of you. I believe in you. That’s why I stand here confident that the State of our Union is strong.

But it was too late, because Twitter was already freaking out over Obama's Friday Night Lights reference. All of the time for him to be serious was over. I mean, you can just drop that reference and expect people to remain serious. Thank God he saved it for the end.

POTUS has shut down hecklers, he's starred in a video for BuzzFeed where he actually said "Thanks, Obama," and he ate a bear's leftover salmon with Bear Grylls. Now, at his last State of the Union speech, he quoted Friday Night Lights. I just can't. It's too much. I'm not crying, I swear!