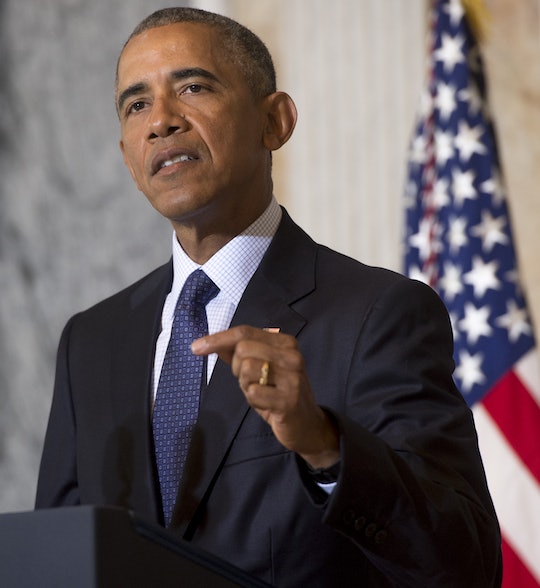 In a strong response to recent comments from Republican frontrunner Donald Trump, President Barack Obama hit back, commenting on "politicians who tweet." Obama responded to Trump's Orlando comments, in which Trump seemed to criticize Obama for not calling the attack in Orlando "radical Islamic terrorism." In response, during remarks at the Treasury Department on Tuesday, Obama said:

That's what they tell us: We can't beat ISIL unless we call them 'radical Islamists.' What exactly would using this label accomplish? What exactly would it change? Would it make ISIL less committed to trying to kill Americans? Would it bring in more allies? Is there a military strategy that is served by this? The answer is none of the above. Calling a threat by a different name does not make it go away.

This is a political distraction. ... There has not been a moment in my seven and a half years as president where we have not been able to pursue a strategy because we didn't use the label 'radical Islam.' Not once has an advisor of mine said, 'Man, if we really use that phrase, we're going to turn this whole thing around.' Not once.

The president reminded viewers that the soldiers on the ground in Syria and Iraq were very aware of who the enemy is. "So do the intelligence and law enforcement officers who spent countless hours disrupting plots," he said, according to CNN. "And protecting all Americans, including politicians who tweet, and appear on cable news shows."

Obama's comments came after a Fox interview Trump gave Monday, in which he seemed to make some strange insinuations about the president. "Look, we're led by a man that either is not tough, not smart, or he's got something else in mind," Trump said, according to TIME. "People cannot, they cannot believe that President Obama is acting the way he acts and can’t even mention the words 'radical Islamic terrorism.' There’s something going on. It’s inconceivable. There’s something going on."

In the past, Obama has made it fairly clear why he won't present terrorists under the guide of Muslim extremism. "We are not at war with Islam. We are at war with people who have perverted Islam," he said in 2015, according to ABC. He continued:

Obama's reasons for rejecting the term "radical Islam" have been echoed by many who point out that the term could alienate (or create an unfair target of) the majority of Muslims, who clearly do not engage in terrorism and whose beliefs are peaceful. According to Vox, both the president and other commentators have pointed out that the United States could also lose valuable Muslim allies by tying terrorism to the religion.

Trump has yet to respond to Obama's thinly-veiled criticism on the "radical Islam" debate, but judging by past events, we shouldn't have to wait too long for a response.