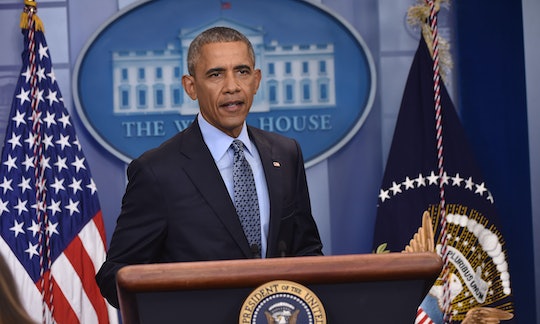 When news broke yesterday of President Barack Obama's decision to commute the sentence of Chelsea Manning, many people were shocked. In fact, Speaker of the House Paul Ryan blasted Obama for his decision, and he wasn't the only one. Americans had mixed feelings on the decision, with many applauding the president's actions, claiming that Manning was treated unfairly, and citing her multiple suicide attempts while incarcerated. Conversely, there were still those who disapproved of the move, most of them Republicans who cited national security in their grievances. At his final press conference Wednesday, Obama defended Chelsea Manning's controversial commutation, saying that she has served a fair amount of time and that justice had been appropriately served.

Manning was convicted in 2013 for her involvement in leaking highly-sensitive information to WikiLeaks back in 2010. At the time, Manning went by the name Bradley and came out as trans while in prison, where she also began her transition.

Assigned male at birth, Manning had an intense childhood, as she was often teased during her teen years, according to a report by BBC. While no exact cases of the bullying were brought to light, Manning was officially out as gay by she time he was 18, so instances of bullying wouldn't be surprising, unfortunately. Her parent's divorced when she was a teenager, and Manning experienced multiple period of instability bouncing between the care of her mother and father, and having witnessed her mother's suicide attempt when she was only 12.

Manning joined the army in 2007, and it was during this service period that she leaked over 700,000 top-secret military documents, including information that proved to be highly embarrassing to the U.S. government and military officials. Because of this, Barack Obama's decision to commute her sentence, and allow Manning to leave prison in May 2017, has been highly criticized.

Defending his decision on the matter during Wednesday's press conference, Obama stated that "given that [Manning] went to trial, that due process was carried out, that she took responsibility for her crime ... the sentence that she received was very disproportionate to what other leakers had received."

Truly, Manning has had a tough time in prison, getting in a violent fight over her sex-change that led to an attempted suicide in her cell back in July of 2016, according to The Atlantic. Sadly, Manning was punished for the suicide attempt by being put in solitary confinement. At the time, her lawyer, Chase Strangio of the American Civil Liberties Union said that the punishment wasn't a smart decision, and could lead to even more problems for “someone struggling with very recent suicidal ideation,” according to The New York Times.

Unfortunately, he was right. During her time in solitary confinement, Manning again tried to take her own life, according to a follow-up report by The Times in November.

Obviously, Obama has his own reasons for granting the commutation, and whether you agree or disagree with his decision, it's important to remember that he still understands Manning is, in fact, a criminal in the eyes of the law — just one that deserves a second chance.

While it's already very clear that president-elect Donald Trump intends to undo much of the legacy Obama will leave behind, this is one decision he can't touch.