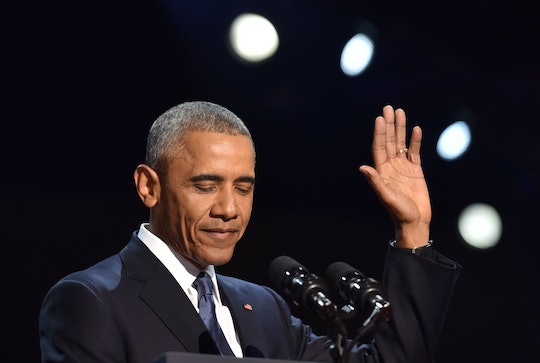 During his farewell speech on Tuesday night, 44th President Barack Obama spoke of the accomplishments he and Americans have made over the past eight years. He gave an emotional but uplifting speech, ending on the note "Yes we can. Yes we did. Yes we can." But arguably the most emotional and touching moment of the night was when Obama said his greatest accomplishment was being a father to Sasha and Malia. It brought down the house, and made Twitter seriously ugly cry.

Obama said, according to the Los Angeles Times:

Malia and Sasha, under the strangest of circumstances, you have become two amazing young women, smart and beautiful, but more importantly, kind and thoughtful and full of passion. You wore the burden of years in the spotlight so easily. Of all that I’ve done in my life, I’m most proud to be your dad.

The statement was a testament to who Obama is as a person. He has never been a cold politician. That just isn't who he is. It wasn't who he was after the Newtown, Connecticut, shooting at Sandy Hook Elementary School, when he addressed the nation in tears when 20 children and six adults were shot to death. He wasn't just a politician when he pushed for marriage equality, becoming the first sitting president to openly support it. He also wasn't just a politician when he authored an essay for Glamour titled "This Is What a Feminist Looks Like," again, becoming the first president to publicly call himself a feminist.

Yes, when Obama did all of these things, he was the President of the United States, which made him saying them all that more meaningful. But, more importantly, as Obama has made these statements and more — like when he and the Justice Department recently stood up for transgender kids who want to use the bathrooms of their identities — he was a father.

That identity — and the fact that it defines him and his accomplishments, in his own words — is arguably one of his most endearing and beautiful characteristics as a person. The empathy and compassion with which he treats the American people is clearly mirrored (and no doubt influenced) by the close relationship that he has with Malia and Sasha.

It would've been historic and influential had Obama written his essay about feminism as just a sitting president, but the fact that he wrote it as the father of two daughters was even more crucial. His daughters and raising them seemed to influence his views and his devotion to public service. He wrote, according to Glamour:

As a parent, helping your kids to rise above these constraints is a constant learning process. Michelle and I have raised our daughters to speak up when they see a double standard or feel unfairly judged based on their gender or race—or when they notice that happening to someone else. It’s important for them to see role models out in the world who climb to the highest levels of whatever field they choose. And yes, it’s important that their dad is a feminist, because now that’s what they expect of all men.

Obama's deep respect for his daughters, and the way that it seemed to influence and affect his respect for the nation was incredible to see. He and his devotion will be greatly missed. But he will still have the nation — because so many people in it are still behind him — and he will always have his family.