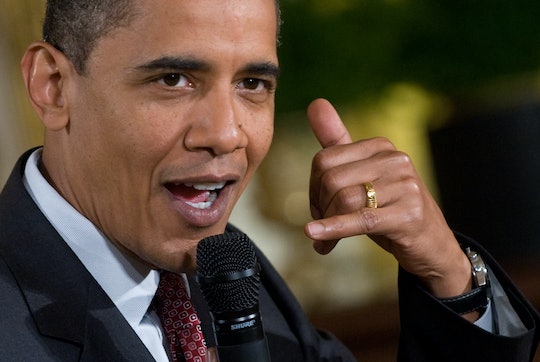 As Election Day draws closer, many of us have been getting — or making — calls for candidates. Among the intrepid cadre of campaign volunteers hoping to make a difference on Nov. 3 was President Barack Obama, who talked to a baby while phone banking for Democratic presidential nominee Joe Biden. And it was just as charming as you'd imagine.

OK, he didn't call the baby (it wouldn't make much sense: babies can't vote and don't usually have phones). He called the baby's mom, Alyssa, who clearly wasn't expecting a call from the 44th president. When Obama asked how she was doing, she responded with a shocked "I'm having a panic attack."

After gently urging her to keep it together, Obama reminded the stunned woman that Election Day is coming up on Tuesday, Nov. 3, offered polling place information, and urged her to tell her family and friends to vote as well. "Oh I will tell everybody that you told me to tell someone," she replied.

The business of the call was done, but Obama wasn't, and he turned his attention to the non-verbal, but quite vocal, third party who could be overheard sitting in on the call, babbling and fussing. "Who's that in the background there?" Obama asked. Alyssa introduced Jackson, who is 8 months old.

When Alyssa suggested the infant was making noise simply because he likes to talk whenever she hops on a call, Obama offered, "You know, if you want to put him on the phone I'm happy to talk to him!" The two shared a brief "conversation" before the former POTUS quipped, "What's going on, man? Do what your mom says."

"I would chat for you for quite some time, but when you have [an 8-month-old], you can't be on the phone for too long," he added.

Of course, it's not the first time Obama has had a charming moment with a baby. Throughout his time in office and beyond, he's seemed to have a rapport with little ones. Some of the most iconic images of his presidency involve him interacting with kids, including the 2009 photograph by Pete Souza, Hair Like Mine. As with talking to 8-month-old Jackson, Obama seems to not only get but enjoy interacting with America's smallest constituents.

The president's conversation with his new buddy Jackson was likely a welcome respite. Obama has been campaigning hard for his former vice president ahead of an election that's still very much up in the air. Though most polls put Biden ahead of President Donald Trump, many supporters fear a repeat of 2016, where similar polls projected a victory for Hillary Clinton. And while more than 93 million votes have already been cast, much will depend on mail-in ballots and in-person turn-out on Election Day.