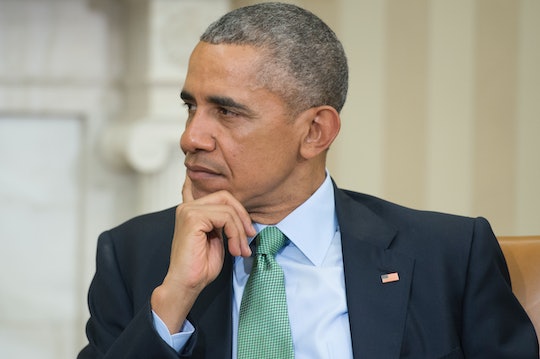 The Associated Press reported Wednesday morning that President Barack Obama would announce his Supreme Court nominee during a Rose Garden ceremony at 11 a.m. Obama's nominee would replace Justice Antonin Scalia's, who died in February, ninth spot on the court. The AP reported that he hasn't named the nominee ahead of the 11 a.m. announcement, but, instead, he just sent an email to his supporters with the subject line "I've made my decision."

Republicans in the Senate Judiciary Committee, along with Republican Senate Majority Leader Mitch McConnell, held a closed-door meeting in late February and all signed a letter promising that they wouldn't hold hearings on a replacement for Scalia until a new president took office, according to the Washington Post. (Of course, the notion is a bit ridiculous, because there could very well be another Democrat in office. Cue eyeroll.)

Senate Republicans' blatant refusal to do their jobs has also been accidentally supported by comments Vice President Joe Biden made while he was a senator and chair of the Judiciary Committee in 1992. Biden reportedly “seriously consider” not confirming a Supreme Court nominee because it was an election year, according to the Post. Of course, the Senate did hold hearings, and a nominee was confirmed — that's the part Republicans are leaving out. Further, Supreme Court nominees have been confirmed at least seven times during presidential election cycles, so there's no rule — informal or formal — that says it can't be done, and precedent actually says the opposite.

Obama released a statement Wednesday morning concerning his announcement, and he said it is his "constitutional duty" to make sure that Scalia's seat does not stay empty until the next inauguration day. Obama listed the three qualities he's looking for in a Supreme Court justice, according to BuzzFeed:

First, a Justice should possess an independent mind, unimpeachable credentials, and an unquestionable mastery of law. There is no doubt this person will face complex legal questions, so it is imperative that he or she possess a rigorous intellect that will help provide clear answers.

Second, a Justice should recognize the limits of the judiciary’s role. With a commitment to impartial justice rather than any particular ideology, the next Supreme Court Justice will understand that the job is to interpret the law, not make law.

However, I know there will be cases before the Supreme Court in which the law is not clear. In those cases, a Justice’s analysis will necessarily be shaped by his or her own perspective, ethics, and judgment.

Therefore, the third quality I looked for in a judge is a keen understanding that justice is not about abstract legal theory, nor some footnote in a dusty casebook. It’s the kind of life experience earned outside the classroom and the courtroom; experience that suggests he or she views the law not only as an intellectual exercise, but also grasps the way it affects the daily reality of people’s lives in a big, complicated democracy, and in rapidly-changing times. In my view, that’s an essential element for arriving at just decisions and fair outcomes.

Obama also reiterated his sentiments that he's just doing his job, and the Senate needs to do the jobs that taxpayer dollars pay them to do.