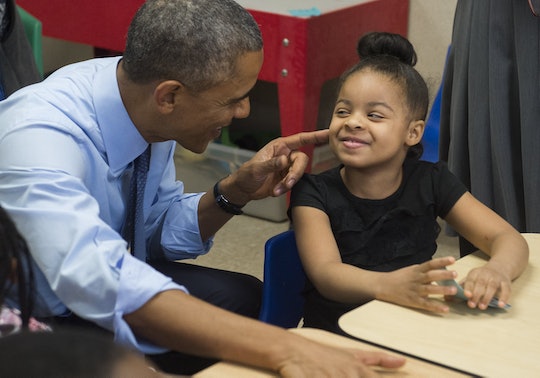 #ObamaAndKids Photos Took Over The Internet, Proving That Politics Isn't All Awful

Lets pretend for just one tiny second on this Monday morning that the caustic presidential election year politics don't exist. And then let's take a look at our president, Barack Hussein Obama, and see him for the good he's done, for his humanity, and for the impact he's made on all of our kids. Over the weekend, social media was flooded with pictures of Obama interacting with kids, something that appears to come really naturally for him. The hashtag #ObamaAndKids took over the internet and was still trending Monday morning.

The hashtag was started over the weekend by Michael Skolnik, a well-known businessman, activist, and father. As he sat watching cartoons with his own almost 3-year-old son, Mateo Ali, over the weekend, he stumbled across the now famous picture of a little boy looking up at the president, and, like the rest of us, he was moved. A president who almost without thinking reached out to touch that baby to let him know that no matter what the rest of the world will try and tell him, he can aspire to lead the White House too, and that the most powerful man in America cares about him. And that's what Obama has done for kids all over the U.S. one interaction at a time, no matter their color — given them a powerful role model who defies every notion of what people have been told a person of color can be. So Skolnik asked people on social media to share their favorite pictures of #ObamaWithKids and the results are enough to make even the grouchiest political pundit tear up a little.

Millions of kids will never grow up in an America that hasn't had a First Family of color in the White House. And Obama, whether you agree with his politics or not, has proved to kids that a president can be so much more than a bunch of dusty pictures of old white men on a museum wall. But don't just take my word for it. If ever there was an antidote for the ugly cynicism of today's politics, it's this reminder of the good a president can do for young people by just acknowledging them and showing them a little love.

Here's the picture that got the #ObamaAndKids ball rolling.

And the adorableness just kept coming all weekend.

If that doesn't make you proud to be an American, then I just don't know what will. Happy Monday.