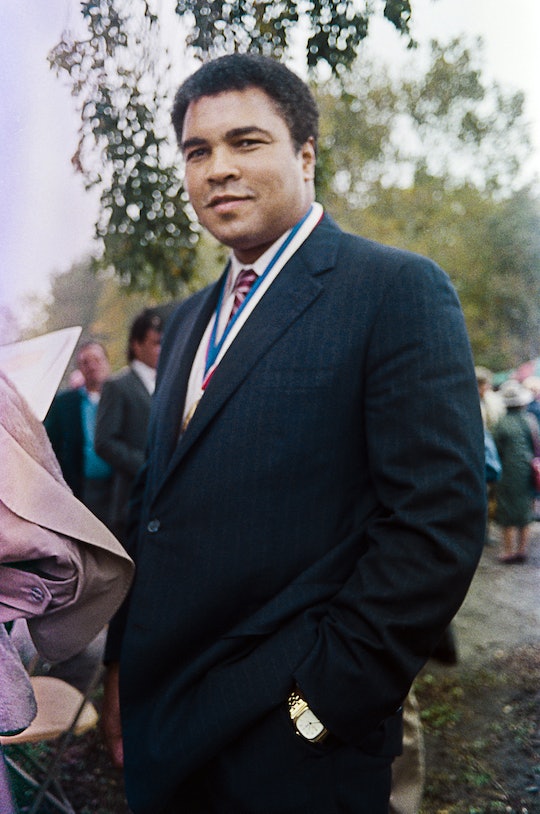 Muhammad Ali was not only a legend in the ring, but his ability to influence society was simply remarkable. The legendary boxer passed away Friday night. Looking back at his life, it's hard to say that Ali was nicknamed "The Greatest" only for how graceful and fierce he was with a pair of boxing gloves. But, he's also known as "The Greatest " for how many people’s lives he touched throughout his own life. In 2010, President Barack Obama penned a tribute to Muhammad Ali on what he meant to him and how the boxer has influenced him. Reading Obama’s words from six years ago is a beautiful reminder to how greatly Ali will be missed and how he'll forever be remembered.

To celebrate 50 years on the world stage, Obama wrote an essay for USA Today in 2010 on how Ali’s extraordinary life and career have influenced his own. Obama wrote about how he admires Ali for his tenacity to do and share good and his courage to face adversities, both in and out of the ring.

"It was this quality of Ali’s that I have always admired the most: his unique ability to summon extraordinary strength and courage in the face of adversity, to navigate the storm and never lose his way," Obama wrote in 2010 for USA Today.

"We admire the man who has never stopped using his celebrity for good — the man who helped secure the release of 14 American hostages from Iraq in 1990; who journeyed to South Africa upon Nelson Mandela’s release from prison; who has traveled to Afghanistan to help struggling schools as a United Nations Messenger of Peace; and who routinely visits sick children and children with disabilities around the world, giving them the pleasure of his presence and the inspiration of his example."

President Obama and First Lady Michelle Obama released a statement to media on Saturday morning from the White House to pay tribute to Ali. The strong and beautiful statements Obama wrote in 2010 echo similarly powerful words that not only powerful figures, like Obama, have expressed, but how Ali will be remembered by the world.

Obama began his statement on Saturday with this simple and true message: "Muhammad Ali was The Greatest. Period."